Of Sugar, Alcohol And Eggs 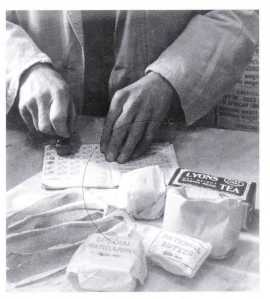 Ironically, being that the philosophy behind the rationing system was to ensure the equitable distribution of supplies to all groups of society, many Britons were better nourished during the war than they had been before. Sugar restriction certainly never harmed anyone’s health.

At the onset of rationing in January 1940, the sugar allowance was 12 ounces per person, per week. The exact amount fluctuated over the years, and there were usually extra ounces at Christmas and at jam-making time, but the people of Britain learned to do with less of it, and to substitute with honey or golden syrup when these were available.

Indeed, creative substitutes were found for many ingredients, but even when the real article was available again (cream, for example), young people who had never acquired a taste for it, retained a preference for the alternative (evaporated milk, for example). 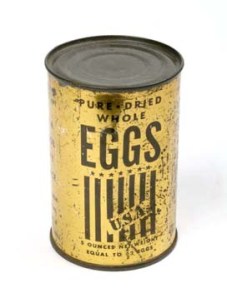 But one substitute that never acquired permanent fans, along with the infamous whale meat, was dried egg powder!

Despite copious promotional material from the Ministry of Food, it was either stoically accepted or openly despised, but never liked.

In April 1953, real eggs also came off ration, and with sugar freely available again from late September the same year home bakers dusted off their old cookbooks with a real sense of joy and went back to work!

More on eggs here and breakfast in general here!