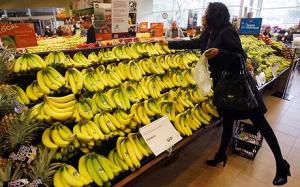 It is believed that bananas originated in Malaysia somewhen around 2,000 B.C. 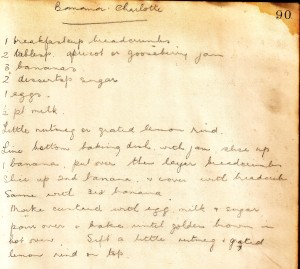 From there, they spread throughout the Philippines and on into India where, in 327 B.C. Alexander the Great’s army recorded them being grown.

Bananas were subsequently introduced into Africa by Arabian traders and were ‘re-discovered’  there in 1482 A.D. by Portuguese explorers.

They in turn took them to the Americas, where the majority of bananas are now produced.

Bananas today grow in most tropical and subtropical regions with the main commercial producers including Costa Rica, Mexico, Ecuador and Brazil.

Since the development of refrigeration and rapid transport in the late 19th and early 20th centuries, bananas have become widely available. 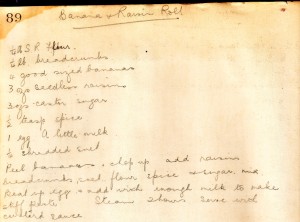 Wonderfully sweet with firm and creamy flesh, bananas come prepackaged in their own yellow jackets and are available for harvest throughout the year.

The plant grows 10 to 26 feet and belongs to the same family as the lily and the orchid.

The fruit clusters contain anywhere from 50 to 150 bananas, grouped in bunches, known as “hands,” containing 10 to 25 bananas.

In the twenties and thirties as recession bit into the global economy the trade in bananas dried up, quite literally, and the old song was revived in the forties by Louis  Prima and appears on: Yes, We Have No Bananas (78 RPM) – 1949  for people who only vaguely remembered the banana and a whole generation of children who had never even seen one!

The recipes on this page are all in my grandmothers handwriting and date, as far as I can estimate, from the early to mid-thirties.