The majority of the clips and articles found within the archive are either anonymous or attributed to ‘A Housewife’ or ‘A Cook’: the generic name for the staff writer assigned to cookery matters. 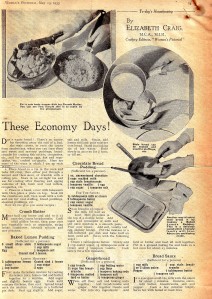 But from the mid twenties onward, names begin to appear more regularly. The cook as a personality began to emerge on the pages of magazines and newspapers. There are a number of ‘writers’ who appear in the archive that were well known in their time as, I suppose ‘celebrity chef’s’ Phillip Harben, Marguerite Patten, Susan King and Fanny Craddock to name but a few.

But one of the most prolific and wide-ranging of these has to be Elizabeth Craig. (left)
Born in Linlithgowshire on 16 February 1883 she was one of eight children. Her father was a minister of the Free Church of Scotland and the family lived at the Manse in Memus, Kirriemuir, in Scotland. 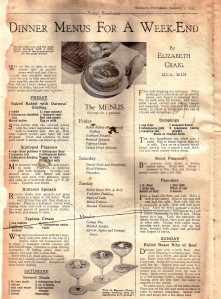 She first published a cookery feature in the Daily Express in 1920, after 8 years in journalism. A talented writer, Craig was soon noticed by other newspapers and magazines who engaged her to write for them.

Craig, like many other food writers successfully managed to make a career from her love and passion for cooking. Her love of cooking lasted her whole life.
She started to cook when she was six and she began collecting recipes from the age of 12.

She published her first book in 1923 and a successful career ensued, publications appearing in many national newspapers, and many more books being written.

She was publishing cookery books from the end of World War I, all through World War II and well into the 80’s.

She began writing in times when food was scarce and rationing was heavily relied upon, and her career ended when the majority of households had a refrigerator and an opportunity to access a much wider variety of foods and her contribution to English culinary literature cannot be denied.

Through a love of food and cookery, Elizabeth Craig created a very large body of traditional British 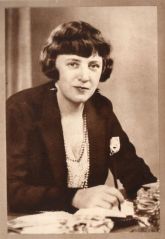 recipes over her sixty year career.

Also included in this voluminous corpus are a considerable collection of recipes from other countries which she liked to collect during visits abroad.