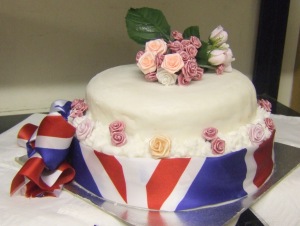 This is a cake I produced for a local nursing home. The theme is homely patriotism.

It is made with the recipe from 1954 that I have reproduced below. The design of the finish is simple and effective, using silk flowers and a Union Flag ribbon.

For those to whom these things are of interest, the Union Flag only becomes a Union Jack when it flies from the mast of a ship.

The cake itself is fairly heavy, rich in fruit and butter, but well worth the attempt as long as you don’t have a serious heart condition!

It has both marzipan and royal icing but minimal amounts of both.

Following the austerity and privation of the war years, the early fifties showed a new spirit of hope. It is true that unemployment levels were high and that many now ex-servicemen needed re-training.

But more importantly, women who had previously been expected merely to tend house and raise children now had a job, with a proper pay-packet at the end of the week, and they wished to hold on to these new-found freedoms! 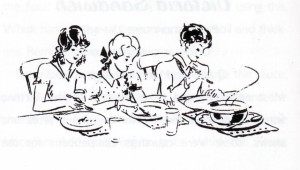