Pancakes are an ancient food that has been around since Neolithic humans domesticated einkorn wheat, (the earliest clear evidence of the domestication of einkorn wheat dates from around 8,650 BC) ground it into flour mixed with bird’s egg and goat’s milk and poured the batter onto a heated rock.

It happened long, long ago on a really nice sunny day, long before pots, pans and microwave ovens, when an ancient cook (he really wasn’t that ancient, probably somewhere in his mid-to-late twenties but there was no NHS back then) dropped a little 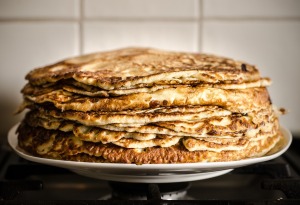 gruel on a hot rock beside a roaring campfire that resulted in a cake that was tastier than the plain gruel cakes cooked directly in the embers of the fire. Unfortunately for him the name he gave them, gruel-baked-on-a-hot-rock-beside-a-roaring-fire never really caught on.

Imagine! All those billions in lost royalties!

But be that as it may, several millennia later following the iron age and the patenting of the first frying pan, the word pancake appeared in print as early as 1430. Because of this ancient lineage, pancakes have become associated with many rituals in many different countries – Shrove Tuesday, Candlemas, and Chanukah to name a few.

And it was from these rudimentary beginnings that a vast array of bread and pancakes burst forth to populate the crofts and cots of the world. The ancient Greeks used griddles to cook a flat loaf drizzled with honey called ‘kreion’ and cakes of soft cheese while the Romans, as revealed in the cookbook by the epicure Apicius made dishes similar to modern pancakes. 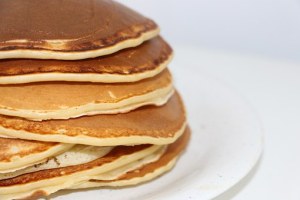 Medieval pancakes, most commonly made from barley or rye and lacking leavening, were pretty awesome affairs. They were quite different from contemporary fluffy or tender versions we know today. Pancakes prevailed as the household bread in homes with no ovens, only an open hearth.

Pancake Day is another name for Shrive Tuesday, from the custom of eating pancakes on this day, which is still generally observed. Shrive is an old Saxon word, of which shrove is a corruption and signifies confession.

The custom of dining on pancakes on Shrove Tuesday is Roman Catholic origin that on the day when all rejoiced alike in the forgiveness of their sins, all should equally feast alike

on the same simple dish. Commonly known as “Pancake Day”, Shrove Tuesday was the day when, historically, perishable ingredients had to be used up before the fasting period of Lent. The pancakes were prepared, denoted by the ringing of the ‘pancake bell’ from the church tower.

And pancakes became an essential element of the classic American breakfast while in other parts of the world pancakes somehow evolved to become exclusively Sunday morning breakfast fare and, since they are so easy to make and there are so many different ways to prepare them, pancakes are a favourite hearty party food to cook for a crowd!

This entry was posted in Bakery. Bookmark the permalink.