‘Hoosier’ Friend (In The Kitchen)? 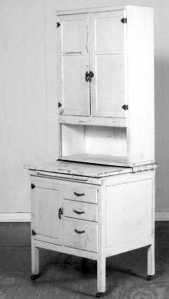 The ‘Hoosier cabinet’ was a type of free-standing kitchen cabinet that also served as a workstation, larder and preparation unit that first became popular in the USA in the first decades of the 20th century. Since most houses of the time did not have built-in kitchen cabinets of dedicated work-spaces.

Hoosier cabinets evolved over the years to include more accessories and innovations that made life easier for the cook in the kitchen. Their popularity peaked in the late twenties and early thirties as homes began to be constructed with built-in kitchen cabinets and counter tops. 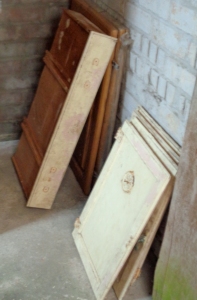 Many years ago my father aquired an example of a Hoosier from the garden shed of an elderly lady by the name of Ruby Barrow. Ruby was an old friend of Granny Robertson and I knew her as a boy in the company of Granny. About five years ago I re-discovered it in the shed, a dilapidated old thing that was part tool cupboard, part oil store, part paint store and part library.

And it became a project, an object 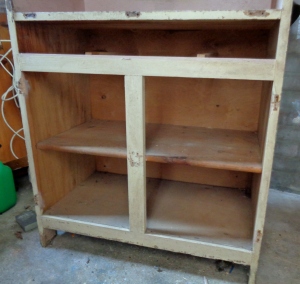 from another generation, Granny Robertsons generation. It was not an original of course, it was a good home-made example made by Mr George Barrow, Ruby’s husband somewhen after the war for their new marital home. 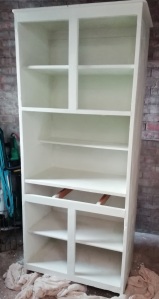 First of all, I got it cleaned it up and washed it white.

It had originally been pale pastel colours so I went for a pale mushroom and apple green combination. Since my sister was going to be housing the finished product and she wished for gold garniture, I painted the garniture gold. 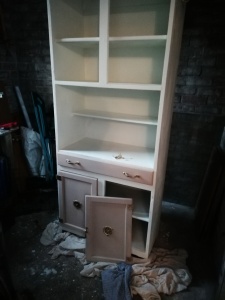 Some of it, the hinges in particular, were very ‘rough and ready’ but despite that I re-used them because they looked the part. I could not find another hinge that would have look any better or more authentic. 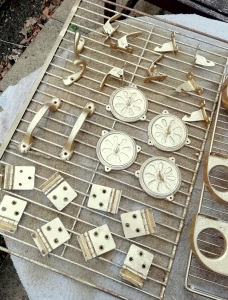 The vents were in good nick and after a bit of tarting up and a bit of WD40  worked nicely and looked pretty good.

The handles and catches had been quite badly twisted during its life as a general dogsbody of a unit but with a little bit of patience they straightened out quite well.

Unfortunately the fold-down table top had long since been removed so rather than attempt a replacement I prettied up the cabinet and left it as an open space.

I returned the egg trays and the paper catchers in the top doors until it looked something like smart. Something very much like this in fact. 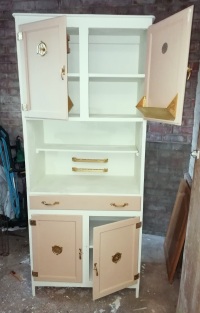 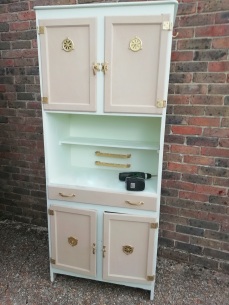 It currently resides in my sister’s garage awaiting the re-vamp of her kitchen into a sort of retro forties look.

Once it is ‘in situ’ I shall post a photo of it in its new setting.

2 Responses to ‘Hoosier’ Friend (In The Kitchen)?