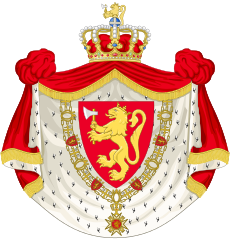 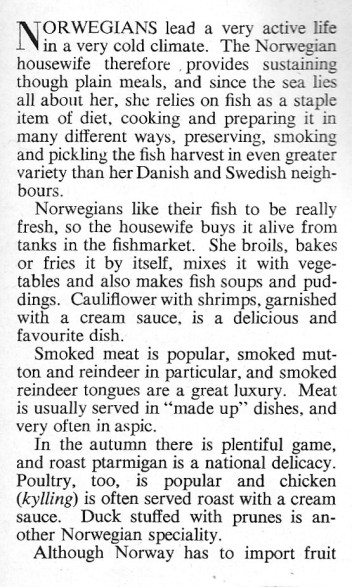 Norwegian cuisine in its traditional form is based largely on the raw materials readily available within the country from its mountains, wilderness and coast.

There is a strong emphasis on game and fish with many of the traditional dishes using conserved ingredients due to the long winters. But, like most other European countries modern Norwegian cuisine, although still strongly influenced by its traditional background, 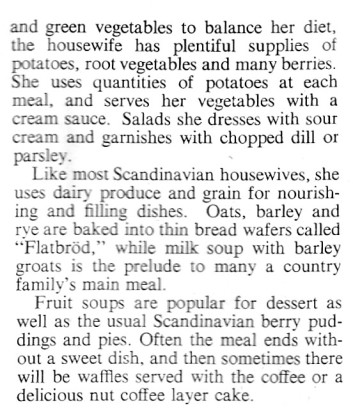 unfortunately now bears the American stamp of pastas, pizzas and burgers. Most Norwegians eat three or four regular meals a day. Breakfast consists of milk or fruit juice, coffee, open sandwiches with meat cuts, spreads, cheese or jam although cereals such as corn flakes, muesli and oatmeal are also popular.

Lunch (middag) is eaten between 1‑7pm. (This is the meal that is considered the “warm” meal of the day. The rest of the meals served throughout the day are generally cold) 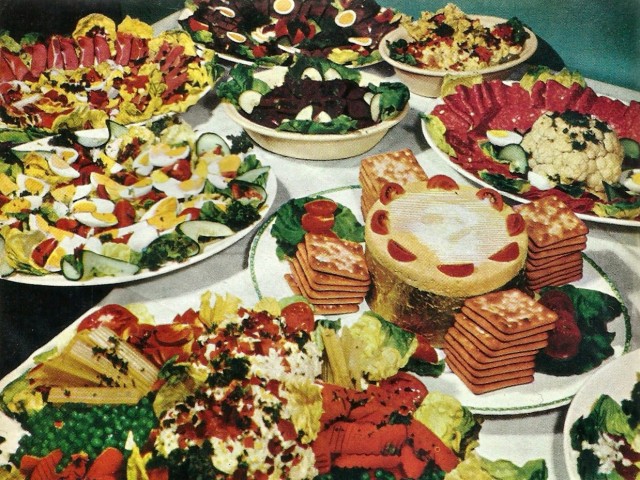 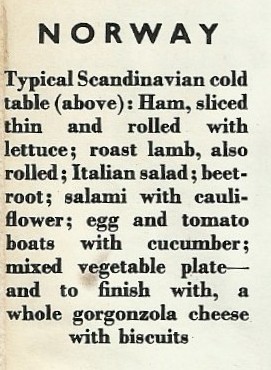 Fårikål, a mutton stew with cabbage, is the national dish of Norway. A very simple preparation it consists of cabbage and mutton, layered into a big pot along with black peppercorns and salt which is then covered with water and simmered until the meat is very tender.

Pinnekjøtt, cured and sometimes smoked mutton ribs that are steamed for several hours (traditionally on a bed of birch sticks, hence the name, meaning ‘stick meat’), is traditionally served as Christmas dinner in the western parts of Norway.

Kjøttkaker are large cakes of ground beef, onion and salt and pepper, roughly the size of a child’s fist, generally served with sauce espagnole.

Kjøttboller are meatballs, similar to those found in Sweden which are served with mashed potatoes and cream‑sauce.

Syltelabb is usually eaten around and before Christmas time, made from boiled, salt‑cured pig’s trotter. Historically syltelabb is served with the traditional Norwegian juleøl or Christmas Ale, beer and liquor (like aquavit). Syltelabb is very salty food.

Smalahove is a traditional dish, usually eaten around and before Christmas time, that is made from a sheep’s head. The skin and fleece of the head is torched, the brain removed, and the head is salted and dried. It is then boiled for about 3 hours and served with mashed swede (rutabaga) and potatoes.

Game, such as moose, reindeer, mountain hare, duck, rock ptarmigan and fowl are often hunted and sold or passed around as gifts but are also widely available in shops.

Because of their distinct, strong tastes, they will often be served with rich sauces

spiced with crushed juniper berries, and a sour‑sweet jam of lingonberries on the side. 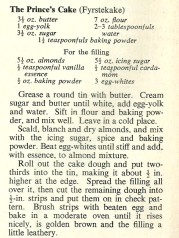 Fruits and berries mature slowly in the cold climate. This makes for a tendency to smaller volume with a more intense taste. Strawberries, bilberries, lingonberries, raspberries and apples are popular and are part of a variety of desserts, and cherries in the parts of the country where those are grown. The wild growing cloudberry is regarded as a delicacy. A typical Norwegian dessert on special occasions is cloudberries with whipped or plain cream. Strawberry‑Apple pie is also popular because of its rich flavor of strawberries and apples.

During Christmas (jul), the traditional Norwegian Holiday season, many different dessert dishes are served including Julekake, a heavily spiced leavened loaf often coated with sugar and cinnamon, and Multekrem (whipped cream with cloudberries).

Bread is an important staple of the Norwegian diet. Breads containing a large proportion of whole grain flour (grovbrød, or “coarse bread”) are popular, likely because bread makes up such a substantial part of the Norwegian diet and are therefore expected to be nutritious. 80% of Norwegians regularly eat bread, in the form of open‑top sandwiches with butter for breakfast and lunch. The variety of bread available in a common supermarket includes wittenberger (crisp‑crusted wheatbread), grovbrød (whole‑wheat bread, often with syrup), loff (soft wheatbread), sour‑dough bread and other German style breads.

During the Hanseatic era, cereals were imported in exchange for fish by the Hanseatic League. The German Hanseatic League and the Danish colonial masters obviously influenced the Norwegian cuisine, bringing continental habits, taste and produce. Norwegians are particularly fond of a crisp crust, regarding a soft crust as a sign of the bread being stale.

Cheese is extremely popular in Norway, though the variety of traditional products available and commonly in use is severely reduced. Norvegia is a common yellow cheese (produced since the 1890s) as is Jarlsberg cheese which is also known as a Norwegian export (produced since the 1850s). The sweet geitost or brown/red cheese (not a true cheese, but rather caramelized lactose from goat milk or a mix of goat and/or cow milk) is very popular in cooking and with bread. 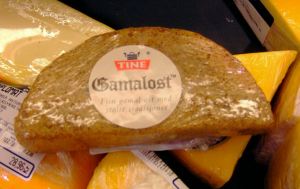 More sophisticated, traditional, or extreme cheeses include the gammalost (lit. “old cheese”), an over‑matured, highly pungent cheese made from sour milk, Pultost, made from sour milk and caraway seeds, and Nøkkelost flavored with cumin and cloves.

Despite restrictive alcohol policies there’s a rich community of brewers, and a colourful variety of beverages both legal and illegal. The most popular industrial beers are usually pilsners and red beers (bayer), while traditional beer is much richer, with a high alcohol and malt content. The ancient practice of brewing Juleøl (Christmas beer) persists even today, and imitations of these are available before Christmas, in shops and, for the more potent versions, at state monopoly outlets. Cider brewing has faced tough barriers to commercial production due to alcohol regulations, and the famous honey wine, mjød (mead), is mostly a drink for connoisseurs, Norse and medieval historical reenactors, and practitioners of åsatru and other Norse neopagan religions. The climate has not been hospitable to grapes for millennia, and wines and more potent drinks are available only from the wine monopolies.

This entry was posted in European Cuisine and tagged Hanseatic, Scandinavia. Bookmark the permalink.

1 Response to The Norwegian Experience