According to tradition, November 25th is the day when the family gathers around the kitchen table to start making the season’s Christmas pudding. In years gone by, Stir Up Sunday – the last Sunday before Advent – would have seen excited children cramming into the kitchen to help prepare the pudding mix. This tradition, however, is under threat as never before. 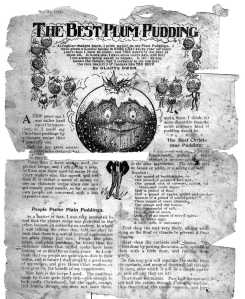 The plum pudding’s association with Christmas goes back to medieval England with the Roman Catholic Church’s decree that the “pudding should be made on the 25th Sunday after Trinity, that it be prepared with 13 ingredients to represent Christ and the 12 apostles, and that every family member stir it in turn from east to west to honour the Magi and their supposed journey in that direction”

It later emerged not as a confection or a dessert at all, but as a way of preserving meat at the end of the season. Because of shortages of fodder, all surplus livestock were slaughtered in the autumn. The meat was then kept in a pastry case along with dried fruits acting as a preservative. The resultant large “mince pies” could then be used to feed hosts of people, particularly at the festive season.

A wartime recipe, written by my grandmother.

The chief ancestor of the modern pudding, however, was the pottage. In the 15th Century, Plum Pottage was a sloppy mix of meat, vegetables and fruit served at the beginning of a meal. It was prepared in a large cauldron, the ingredients being slow cooked, with dried fruits, sugar and spices added to the tastes of the family.

In 1664, Oliver Cromwell banned the pudding. Eating it was a lewd custom inappropriate for people who followed God, he declared.

As techniques for meat preserving improved through the 17th and 18th  centuries, the savoury element of both the mince pie and the plum pottage diminished as the sweet content increased. The mince pie kept its name, though the pottage was increasingly referred to as plum pudding.

A recipe from the early fifties

The pudding was effectively re-established in 1714 by King George I. Sometimes known as the Pudding King he requested that Plum Pudding, with meat eliminated from the recipe, be served as part of his royal feast in his first Christmas in England.

Although Plum Pudding was always a celebratory dish it was originally eaten at the Harvest Festival, not Christmas. It was not until the 1830s that the cannon-ball of flour, fruits, suet, sugar and spices, all topped with holly, made a definite appearance, becoming more and more associated with Christmas.

The type of Christmas pudding most people would recognise on their dinner tables probably came from Germany with Prince Albert in the 19th century.

But despite all that,  according to a recent survey, almost two thirds of British children have never stirred a Christmas pudding mix. Stir Up Sunday is in danger of becoming a thing of the past.  Changing tastes, coupled with the increased availability of good quality, ready-made supermarket puddings and modern hectic lives, mean that fewer people are taking the time to make Christmas puddings. 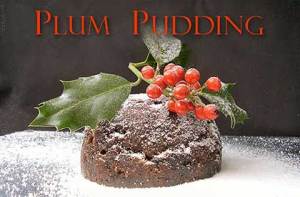 So now a campaign is being launched, to try to save the home-made pudding and its associated traditions from extinction. And Stir Up Sunday is the perfect way to interest children in food and cooking. It will also ensure that family recipes that have been handed down through the generations are not lost.

The Christmas Pudding has even been found to have health benefits. It is mostly made up of mixed dried fruit such as raisins, currants and sultanas which are all good sources of antitoxins that neutralise toxins in the body.