The Quince is a fruit of ancient origin. The Roman cookbook of Apicius, a collection of Roman cookery recipes compiled in the late 4th or early 5th century AD gives recipes for stewing quince with honey and leek.

Historically, marmalade was made from quince (the English word ‘marmalade’ comes from the Portuguese word marmelada, meaning ‘quince preparation’ and is used to describe quince cheese or quince jam : ‘marmelo = quince’)

Nowadays, a marmalade is defined as a jellied fruit product that holds suspended within it all or part of the fruit pulp and the sliced peel. It is prepared from pulpy fruits, preferably those that contain pectin. Citrus fruits are especially desirable because of

their flavour and pectin content. They are gorgeous cooked, and make the most beautiful rose-coloured jam, loaded with natural pectin, so there’s no need to add any during the making.

Quince are a rather an odd fruit. They look like a cross between an apple and a pear, and as such seem inviting to eat. But take a bite of one picked from the tree and the sour, astringent taste will make your mouth curl up in disbelief.

Ripe quince have a strong, floral fragrance, very close to roses. For best results use quince that are ripe and rose scented. When choosing what quince to pick or buy, smell the bottom of the fruit.

It should have a strong floral fragrance. If not, it’s not fully ripe. 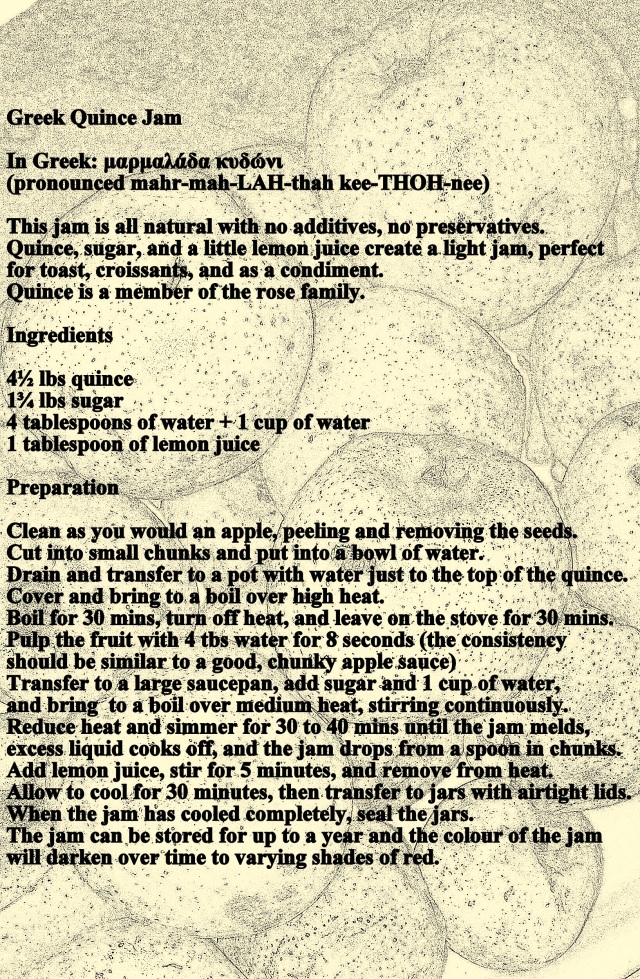 Quince cheese, also known as dulce de membrillo in Spanish, is a sweet, thick, jelly made of the pulp of the quince fruit.

Quince cheese is a common confection in several countries, where it goes by

other names, such as carne de membrillo or ate de membrillo in Spanish, marmelada in Portuguese, marmelo in Galician, codonyat in Catalan, cotognata in Italian, birsalma sajt or birsalma zselé in Hungarian and membrilyo in Tagalog. In Australia, it is known as quince paste. The taste is sweet but slightly astringent, and it is similar in

consistency, flavour and use to guava cheese.

It is sold in squares or blocks, then cut into thin slices and spread over toasted bread or sandwiches, plain or with cheese, often served for breakfast or as a snack, with cheese or to stuff pastries.

The Pastafrola, a sweet tart common in Argentina, Uruguay and Paraguay, is usually filled with quince paste. In Argentina and Uruguay, the dulce de membrillo is also a popular dessert, eaten with cheese, 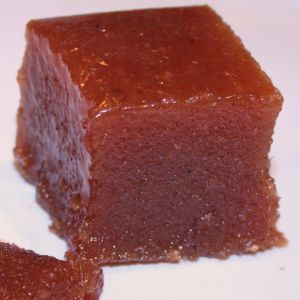 In the Philippines the dessert is known as membrilyo, even if it is made of guava, since quince is unavailable in the former Spanish colony. It is a traditional part of the nochebuena served on Christmas Eve.

In French  quince paste or pâte de coing is part of the Provence Christmas traditions, a part of the thirteen desserts, that are the traditional dessert foods used to celebrating Christmas the region.

In Serbia, Hungary (where it’s called birsalma sajt) and continental Croatia, quince cheese is an often prepared sweet and is named kitn(i)kes, derived from German ‘Quittenkäse’ Also a New England specialty of the 18th century, it required all-day boiling to achieve a solidified state, similar to the French cotignac.

Péter Melius Juhász, the Hungarian botanist, mentioned quince cheese as early as 1578 as a fruit preparation with medical benefits.

Quince are available in October and November in the Northern Hemisphere.

This entry was posted in The Evolution Of . . . and tagged Apicius, guava, jam, jelly. Bookmark the permalink.