Mincemeat, that quintessentially English pie filling consisting of chopped, spiced fruits flavoured with sherry, brandy and to be honest any other booze you may have lying around! Widely popular in the UK, it is traditionally served as pies around Christmas time.

Both America and Australia (the articles in this post tell how to use the excellent dried fruit from Australia that was beginning to arrive in the Britain early in the twentieth century)  lay claim to the boozy delicacy.

But to understand how the mix came to be labelled with the epithet mincemeat we have to take a look at it’s history.

The point here is simply that if you didn’t actually grow up with mincemeat, the chances are you’re going to be totally dumbfounded by what it actually is! Logically one would imagine that, by the sound of it,  the main ingredient would actually be meat. And to be perfectly honest about it, that would be true! Mincemeat was originally created as a means of preserving meat, principally mutton, without having to resort to smoking or salting.

From such humble beginnings it became, (on the return of the Crusaders in the 12th century with cinnamon, cloves and nutmeg), pimped up into the 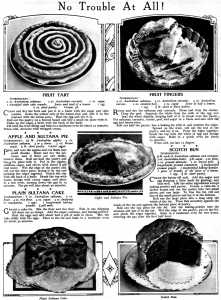 Christmas staple it is today.

The three spices were symbolic of the gifts given to the baby Jesus by the Magi, therefore forging the Christmas link. The spices contain antimicrobial properties that helped to keep the meat through winter, whilst also masking any stale meat flavours. The meat used was normally finely chopped, or minced, which is where the pie got its name.

By the 20th century, beef suet had replaced the meat in the majority of cases and the fruits (apples, dried raisins candied citrus &c) and the alcohol (such as Brandy, Whisky and Sherry) took centre stage. Today, sometimes even the suet is taken out to be replaced with butter to make it vegetarian-friendly.

Despite many transformations over the centuries mince pies are still a popular Christmas item with British bakeries notching up sales of up to 40m mince pies over the Christmas period. Despite the high volume sales of the commercial bakeries, it is agreed upon that homemade product is always the better option. The ingredients list can be long, but the end result is well worth it.

Unfortunately, most people have never tasted a true old-fashioned mincemeat pie (also called mince pie). The flavour of real mincemeat pie is closer to a Middle Eastern dish with its mixture of cloves, cinnamon and nutmeg.

Mincemeat developed as a way of preserving meat without salting or smoking some 500 years ago in England, where mince pies are still considered an essential accompaniment to holiday dinners just like the traditional plum pudding.

This pie is a remnant of a medieval tradition of spiced meat dishes, usually mutton, that have survived because of its association with Christmas.

These pies, as part of the Christmas table have long been an English custom. (The term mincers in cockney rhyming slang derives from mince pies  and means eyes!)

Today, we are accustomed to eating mince pies as a dessert, but actually “minced” pie and its follow-up “mincemeat pie” began as a main course dish with more meat than fruit (a mixture of meat, dried fruits, and spices).  As fruits and spices became more plentiful in the 17th century, the spiciness of the pies increased accordingly.

The mince pie was originally made in an oblong casings (coffin, cofyne or manger shaped), with a place for the Christ Child to be placed on top. The pies are traditionally quite small and even today it is thought to be lucky to eat one mince pie on each of the twelve days of Christmas (ending with Epiphany, the 6th of January).

Over the years the size and shape of the pie has gradually changed from oblong to round, and the meat content has gradually been reduced until the pies are now simply filled with a mixture of suet, spices and dried fruit, previously steeped in brandy.

In 1413, King Henry V of England served a mincemeat pie at his coronation while King Henry VIII liked his Christmas pie to be a main-dish pie filled with proper mincemeat.

A 16th century cookery book that also includes some account of domestic life, cookery and feasts in Tudor days, was called:

A Proper newe Booke of Cokerye, declarynge what maner of  meates be beste in season, for al times in the yere, and how they ought to be dressed, and  serued at the table, bothe for fleshe dayes, and fyshe dayes

has a recipe for a pie that sounds a lot like a modern day mincemeat pie:

In the1588 Good Hous-Wiues Treasurie by Edward Allde, meats were still cut up to be eaten with a spoon and combined with fruits and heavy spices.  Typical was his recipe for Minst Pye which used practically the same ingredients that go into the modern version.

In  1657 Oliver Cromwell (1599-1658), the self-proclaimed Lord Protector of England from 1649 until 1658, detested Christmas, proclaiming it a pagan holiday (one not sanctioned by the Bible that promoted gluttony and drunkenness).  Oliver Cromwell’s Puritan Council abolished Christmas on December 22, 1657.  In London, soldiers were ordered to go round the streets and take, by force if necessary, any food being cooked for a Christmas celebration.  Cromwell considered pies as a guilty, forbidden pleasure and so the pie was banned. King Charles II (1630-1685) restored Christmas when he ascended the throne in 1660.

In the 17th and 18th centuries, mince pies, sometimes known as shred or secrets pies, were made in eccentric shapes.  Maybe this was done to originally hide the fact that these were actually mince pies which were banned during the Christmas celebration in England, and possibly the tradition just continued for many years 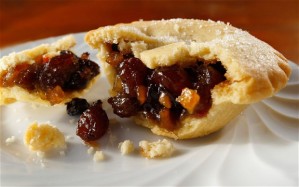 In 1659, Oliver Cromwell’s Puritan influence crossed the Atlantic to the British Colonies there, and many New England towns went so far as to actually ban mincemeat pies at Christmas time.  Christmas was actually banned in Boston from 1659 to 1681 and those caught celebrating it were fined.

The Quaker Elizabeth Ellicott Lea explained in her book called Domestic Cookery, published in 1853 that:  “Where persons have a large family, and workmen on a farm, these pies are very useful.”  By useful, she meant that the pies could be baked in large numbers, and more importantly, during cold weather, they could be kept for as long as two months.  The mincemeat could be made ahead and kept even longer.

In the late 19th century, in those communities that existed to hunt whale, mince pies were even produced using whale mincemeat.

But the modern day mincemeat pie contains no meat, definitely no whale, sometimes no suet, sometimes no alcohol, and is nothing more than a wimpy salute to the manly, meaty pie of mincemeat history. Henry VIII must be spinning in his grave!

This entry was posted in Christmas, Pastry and tagged religion, spices, traditional. Bookmark the permalink.

4 Responses to Feast Your Eyes . . . On Mince Pies