The traditional Burns supper is a celebration of the life and poetry of Robert Burns. Normally held on or near the poet’s birthday of 25th January they are often referred as Burns Nights.

For a starter, you may consider a home-made Scots broth or cock-a-leekie soup.

The centrepiece of any good Burns Supper menu is the iconic haggis! (Or as the bard himself described it, ‘that great chieftain o’ the puddin’-race’)

Traditional accompaniments to the haggis are neeps and tatties or as they are more commonly known – swede (turnips are fed only to pigs!) and potatoes. These are normally served mashed and well peppered.

Finally, to round off your Burns Supper menu, pudding might consist of a traditional Clootie Dumpling or a classic cranachan.

Whisky is the usual choice of slurp at Burns Suppers, either malts or blends. Contrary to popular belief, adding a little water to your malt should improve rather than dilute the flavour, although some whisky drinkers may not take kindly to watering down their drams! 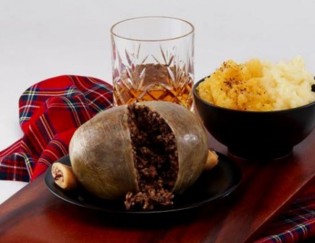 A Burns supper is a celebration of the life and poetry of Robert Burns. Burns suppers are normally held on or near the poet’s birthday of 25th January and are often referred as Burns Nights.

1. After Queen Victoria and Christopher Columbus, Robert Burns has more statues dedicated to him around the world than any other non-religious figure.

2. J.D. Salingers famous 1951 novel Catcher in the Rye based its title from a poem by Robert Burns Comin’ Thro’ the Rye.

3. The Soviet Union was the first country in the world to honour Burns with a commemorative stamp, marking the 160th anniversary of his death in 1956. 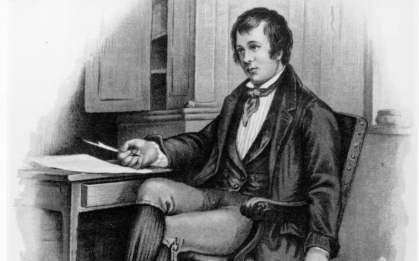 4. Burns fathered at least 12 children with four different women during his short 37 year lifetime. His youngest child, Maxwell, was born on the day of his funeral.

5. American president Abraham Lincoln had a lifelong admiration for the work of Robert Burns, with some claiming that the poet’s verse played a key role in helping Lincoln win the American civil war and abolish slavery.

7. The city of Atlanta, Georgia, has a life-size replica of the Alloway cottage that Burns was born in. It was built by the Burns Club of Atlanta in 1911. (The town of Mosgiel, near Dunedin, New Zealand was named after Robert Burns’ farm.)

8. A miniature book of Robert Burns’ poetry was carried into orbit by astronaut Nick Patrick on a two week space mission in 2010, completing a 5.7 million mile trip and 217 orbits of the Earth.

9. ‘Auld Lang Syne’  is recognised by the Guinness Book of World Records as being one of the top three most popular songs in the English language. The other two are ‘Happy Birthday’ and ‘For he’s a jolly good fellow’

10. Burns body was exhumed in 1815 to be placed in a new mausoleum in Dumfries. Whilst his body was above ground, a plaster cast of his skull was taken for study. The skull was measured and discovered to be bigger than the average man’s.

This entry was posted in Scotland, Vegetarian. Bookmark the permalink.