Belisha And The Zebra Crossing

Belisha is a card game first published by Castell Brothers Ltd (Pepys Games) in 1937 that utilises the rules of Rummy with the traffic signs in the United Kingdom making up the theme.

Instead of the standard suits and numbers in a 52-card deck, Belisha’s cards can be grouped into numbers, colours, and types of traffic signs using period illustrations highlighting safety in motoring situations. 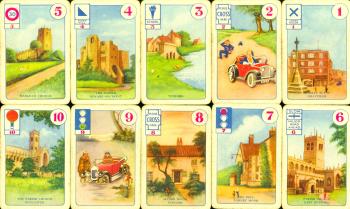 Based on a car journey from London to Oban, Belisha was produced to make a helpful contribution to the national “Safety First”

campaign that followed the introduction of ‘Belisha’ beacons, (named after Leslie Hore-Belisha, the minister for transport)

The round yellow flashing lights on black and white striped poles at zebra crossings were designed to reduce road casualties, particularly among children.

By 1951 the black and white stripes, with Belisha beacons on either side of the road, were approved as ‘Zebra’ crossings.

As with Rummy, the players are dealt a hand of cards. Each player then takes turns in drawing a card from the deck or the first card of the discard pile with the aim of disposing of all the cards in their hand by playing them in sets or straight sequences.

They can also play their cards to extend sets or sequences laid out by their opponents.

The turn ends when a card is discarded. The game, or the current round, stops when a player has played or discarded his last card.

Players then calculate the value of the remaining cards in their hands and take that as their score for the round and begin the next by reshuffling the deck and dealing new hands.

The game ends when a player has accumulated a pre-arranged score (usually 250) at which point the player with the lowest accumulated score is the winner.

This entry was posted in Childrens Pastimes and tagged cards, educational, fun, games. Bookmark the permalink.