For the past four years I have believed that my Poppy was a Golden Retriever. She has the look, the temperament and the possessive nature so why should I not?

And then in the course of a conversation with a young Hungarian care worker I met in a nursing home near here when looking at some photographs, I was told quite firmly that she was not a Retriever but a Slovenský čuvač (Slovakian Koovass) or sheepdog!

It turns out that the girls father was a shepherd in northern Romania and used to breed them and she grew up surrounded by these lovely white dogs. 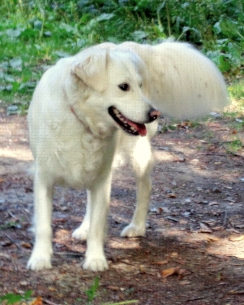 When I questioned this, certain that she was pulling my leg, she pulled up some photographs on Wikipedia of the  Slovenský čuvač. It can be either straight or curly coated and weigh anywhere between 32 and 52 kilos, the females tending toward the lower end , the males to the higher.

Slovenský čuvač  is boundlessly loyal and strong willed, resisting every enemy including bears and wolves. By tradition the animals are always bred white in order to make them distinguishable from ‘the beasts of the night’

A good watchdog, guard, shepherd and companion, the Slovenský čuvač  proved itself invaluable in watching sheep but cattle, hens and other domestic animals as well as its master’s property.

Slovak sheep farming has a very old tradition, well documented as far back as the 17th century. However, as wolves slowly began to disappear from the European mountain ranges and modern herding practices were instituted, it was faced with becoming a mere relic of the past.

But full credit for reviving the breed and establishing the standard is owed to Dr. Antonin Hruza  who registered breeding of the čuvač  at the Veterinary Faculty of Brno University on June 4, 1929. (Brno is the second largest city in the Czech Republic)

The Club of the Breeders of Slovenský čuvač  was established in 1933 and a written standard was established and approved in 1964. Holiday makers and visitors to the mountains and spas of the region took to the  breed, leading to its appeal as a family friendly dog and its growing popularity.

All of the images on the left are from Wikipedia while those on the right are of Poppy.

This entry was posted in Sammy & Alice. Bookmark the permalink.