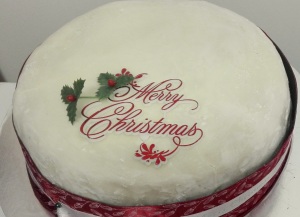 This year’s Christmas project has been to produce a sugar free (well, almost . . .) Christmas cake, using only the ingredients I had on hand: no special purchases.

The cake was easy enough, a low sugar recipe from a small volume on Christmas cakes I found earlier this year in a charity shop (which have proved a great source of material for this blog in the past)

I must admit, as low sugar cakes go it was not too bad. Instead of beer I used very strong tea and replaced the majority of the sugar with honey.

The marzipan proved easy, the ground almonds easily accepting the sugar substitute (in this case Canderel) to

And then there’s the icing. This was a bit more tricky. It began with a base of cornflour with sweetener (our old friend Canderel again) made into a paste with egg whites. 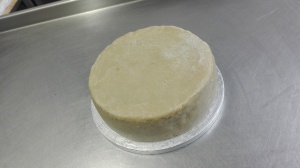 The result was interesting, giving a slow flowing coating that I put on the top and let ‘flow’ of its own accord down the sides.

A nice idea that worked fairly well, a nice smooth coating that I was actually quite pleased with until, as it dried, it began to yellow and become brittle. Not seriously enough to make it unusable of course and the coating was easily removable at the cutting stage.

Also, there was no hope of producing garnish such as holly leaves or roses and so I had to resort to a kind of pre-made (see above) decoration but to be honest, it achieved its objective.

I shall try again at some time in the future but making sure that I have some liquid gums and bindings on hand first!

This entry was posted in Christmas. Bookmark the permalink.