A few weeks ago I took Poppy on a voyage of discovery to Billy’s Lake. Being a dog of the woods and the short mown grass of the local park, she loved running through the long grass, in places taller than herself. 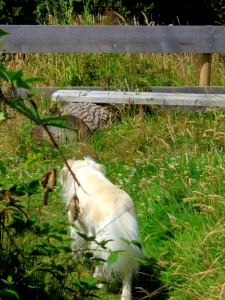 And there we found a man in a digger clearing a path from the car park and off toward the lake.

But not for the building of yet more houses and flats but to provide a hard flat pathway for the visiting fishermen who now cast their lines into the cool, green waters.

Now there are some places that should not be revisited and Billy’s lake is one of those, a place of mystery and adventure that filled many childhood hours with fun, frolics and lots of wet swampy mud! Because Billy’s Lake was part of a large, wet, swampy area to the north of my childhood home.

Back then, legend had it that it was only accessible by bicycle and even then parts of the trek required the bicycle to be physically man-handled across the wetter parts, whilst avoiding the large patches of stinging nettles and the deeper, gloopier patches of black mud that could remove both shoe and sock in one go!

The bicycles were mainly those rickety old death traps handed down by fathers and older brothers, drop handles, five or possibly ten gears, aluminium mudguards and names like Raleigh, Triumph and Ranger. 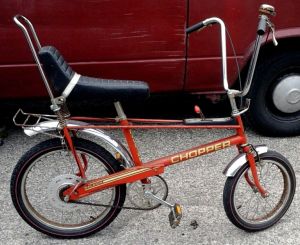 Unless you were really lucky and some parent with more money than sense bought you a Chopper, like my mate Trevor.

With its exotic orange painted frame, (other colours were available though not nearly as stunning) shoulder high handlebars and central gearstick it was the envy of the district!

Despite being a pig to steer, especially when changing gear, and inordinately heavy it was considered the best thing since sliced bread. Health and Safety would have had a fit!

Under thick hedgerows dens would be constructed as protection against Red Indians, swamp ‘Things’ and seasonal downpours as well as providing a dining hall for the consumption of packets of sandwiches, bottles of orangeade and blackberries picked from the ubiquitous brambles. Bicycles would be taken apart and reassembled just to find out how they worked. 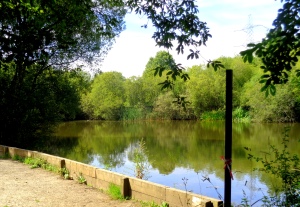 How we survived all that thick, black mud, huge beds of nettles, muddy water and eating sandwiches from hands caked in both mud and bicycle grease I shall never know.  But we did.

A word to the wise out there, don’t grow up!

This entry was posted in Childrens Pastimes and tagged bicycle, fishing, poppy. Bookmark the permalink.