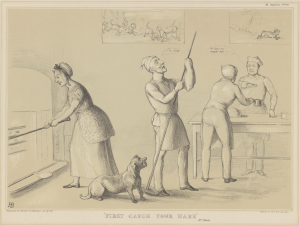 The eating of hares and rabbits has a venerable history in Europe.

Greeks, Germans, Spaniards and Britons love rabbits and hares, as do Italians in certain regions. Most of the recipes in modern usage have their roots deep in those European traditions.

Often maligned as ‘poor people’s food’ both rabbits and hares can make better eating than some of the larger game. Rabbits are typically tender and of a perfect eating size, one will serve a person nicely, although you can split one rabbit between two people if needs must! 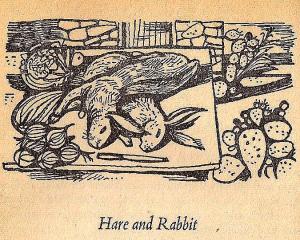 Despite their cute and fluffy appearance, rabbits are a long overlooked source of sustainable meat. One of the primary differences that set rabbit apart from other meats is that it is one of the only animals we are prepared to eat here in the UK that is also kept as a domestic pet. I mean, who on earth wants to tuck in to Fluffy’s baby sister? 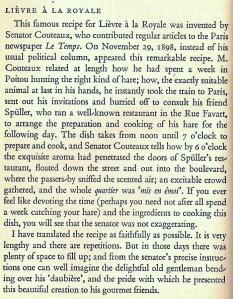 going to be subject to a fair degree of horrified reluctance.

Hares on the other hand are not so cuddly. Larger, up to 12 lb in weight, one will serve four easily. Hares have the darker, stronger flavoured meat both are served braised by long tradition. Not having been domesticated and unlike rabbits they live in small groups and nest above ground as opposed to complex warrens of the rabbit.

The number of wild rabbits in the UK is estimated at around 50 m while hare numbers tend to hover somewhere around 4 m. 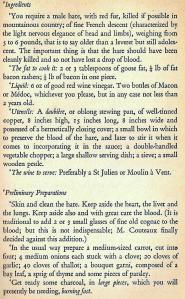 It should be a foregone conclusion then, that with such numbers and the common knowledge of their over-enthusiastic breeding, rabbit is a meat should be on the menu far more frequently despite the sentimental affection for the bunny.

A wild rabbit in the UK will eat more grass than a sheep, and hares can consume up to three times as much. Given a good combination of herbs and seasonings these wild animals have a subtle gaminess not at all in the ‘tastes like chicken’ category whilst hare is always wild. (about getting caught most probably!) 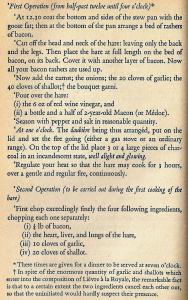 good butchers, but in Scotland you will often find the blue or mountain hare.

Traditionally, hare should be hung undrawn; guts still inside, for seven to ten days to enhance its flavour and to tenderize the meat.

However, speaking to several chefs*, it appears this can make the meat somewhat overwhelming and so it is usually hung with its insides removed.

One of the main problems cooks face with rabbit and hare is that they both dry out rather quickly. Braising is the preferred method by the traditionalist, as is their inclusion 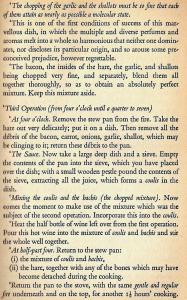 in pies and casseroles. Their use in stews is also a most noble way of preparing those cute little buck-toothed bunnies!

Myself, being an unrepentant, dyed in the wool traditionalist, trained as a cook in the classical style, go along here with the recipe for lièvre à la Royale (right) that Elizabeth David gives in her 1950’s volume, A Book Of Mediterranean Food.

It is just pleasing to note that unlike the current breed of ‘celebrity chefs’ she has not added her own unique twist and claimed it as her own, purely for royalty purposes of course, but recounts it as written by Senator Couteaux in his 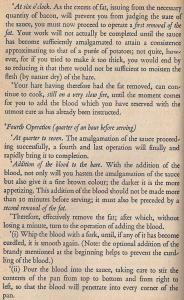 *It is, and always be, my contention that there is only one chef in the kitchen, the chief cook, the man, or woman, in charge. All the others are cooks of differing levels of knowledge and experience who, pulling together under their leader produce well-presented and highly edible food. Anyone can call themself a chef but it doesn’t follow that they can cook!

To outrageously misquote the late Lady Thatcher ‘If you have to tell people you’re a chef, you aint!’ 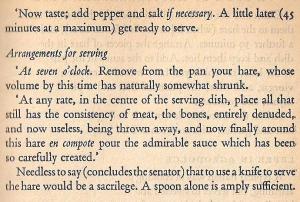