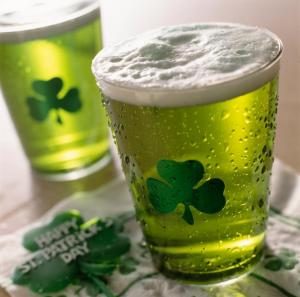 Growing up in the 70’s St. Patrick’s Day in the UK was an alien concept. With the ‘troubles’ in Northern Ireland at their height it was a time when any self-respecting British city would refuse to open their public spaces for the celebration of any and all things Irish.

Once finished with catering college and beginning my travels across Europe, a sense of what St. Patrick’s Day meant to people outside of Great Britain through the odd news story about celebrations coming out of the U.S. began to appear.

much more of a party amongst the Irish Americans than the British.

There has been an observance of St. Patrick’s Day in Ireland, as a religious feast day, since the 17th century to commemorate the death of St. Patrick in the 5th century.

Patrick is credited with having brought Christianity to Ireland, and as such became a figure of national devotion and, in due course, the nation’s patron saint. The day’s importance was confirmed in 1631 when it was recognized by the Vatican.

grand ball in Dublin Castle each year in the late 19th century amongst the people it was a day of quiet and reflection. Wasn’t even a public holiday in Ireland until 1904!

Even as the day transformed itself into a public, though rather sombre, spectacle, complete with a military parade through Dublin

from the 1920’s to the 1950’s. The parade followed morning mass, and, horror of horrors, the pubs and bars across the country closed for the day!

In the mid-1960s the bars began opening on the day and the military and parade was replaced by a more general parade of fun and frivolity in turn transformed into the St. Patrick’s Festival, in 1996.

Today it’s a four-day event of music, live performance, and a two-hour parade that draws up to half a million people onto the streets of Dublin.

But to understand the global significance of the day it is necessary to ‘cross the pond’ to New York. The New

By the 20th century, it was so ubiquitous that St. Patrick’s Day became a marketing bonanza: greetings cards filled drugstores, imported Irish shamrocks (indeed anything green)

showed up on T-shirts, and the food and drink that became associated with the day became bar promotions.

Today, the New York City Saint Patrick’s Day Parade will have been marched up 5th Ave. for 253 years. ‘The oldest, largest, and best in the world’ starts at 44th Street at 11 am, marching up 5th Avenue past St. Patrick’s Cathedral at 50th Street, the American

Irish Historical Society and the Metropolitan Museum of Art on 83rd Street to 86th Street, where the parade finishes mid-afternoon. It is held every March 17th except when March 17th, falls on a Sunday when it all goes off the day before because of religious observances.