Flag of the Czech Republic

Flag of the Slovak Republic

Vánoce in Czech and Vianoce in Slovak both mean Christmas! 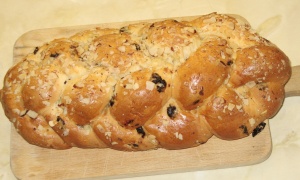 Being rich in eggs and butter, makes them similar in many ways to brioche. Lemon rind and rum add color and flavor while fruits and almonds are also generally added.

Both the Vánočka and the Vianočka are built from three progressively smaller braids, stacked on top of each other.

This entails dividing the risen dough it into 9 parts. The first layer is weaved from 4 strands, the second from 3 strands and the third from 2 strands.

They should be laid on top of each other (4:3:2) and left to finish rising.

The final shape supposedly represents a vague sort of sculpture of the baby Jesus wrapped in cloth and lying in a manger.

But be that as it may!

This entry was posted in Breads, Christmas. Bookmark the permalink.