Georges-Auguste Escoffier, (28 Oct 1846 – 12 Feb 1935) is the second contender for the ‘King of Chef’s, Chef of Kings’ title coming up against Marie-Antoine Careme

Born at Villeneuve-sur-Loup, some 9 miles from Nice. Being very slight of build his father, a blacksmith and tobacco grower did not think him suitable for the blacksmith business and at the age of 13, the young Georges-Auguste started working for his uncle who owned the Restaurant Français in Nice.

In 1865, Escoffier met a man by the name of Bardoux invited him to Paris, to work at Le Reine Blanche restaurant (later to gain fame as Le Petit Moulin Rouge)

Then, in July 1870, Escoffier was drafted into the army, as a cook, for the Franco-Prussian War. But not for him the job of a regular soldier, he was required to cook for Marshal Achille Bazaine and other Generals stationed on the Rhine.
When, following a lengthy siege, Bazaine surrendered Metz to the Germans on 27 October 1870, Escoffier then spent six months at Wiesbaden as a prisoner of war. After the first two months, though, he began working as chef de cuisine for Marshal Mac-Mahon and his staff, who were also imprisoned there. 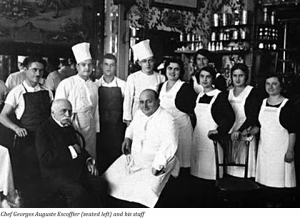 Freed in April 1871 Escoffier returned to civilian life and from 1872 to 1878, he worked each winter in the south of France, and each summer at Le Petit Moulin Rouge.

In 1874, he started a friendship with the great actress Sarah Bernhardt and remained a lifelong admirer of her. He created ‘Pêches L’Aiglon’ in her honour. 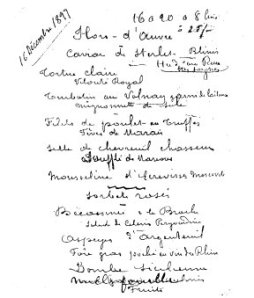 In 1878, he tried his hand at owning his own restaurant in Cannes, buying a restaurant called Le Faisan d’Or which he ran for two years.

In 1880 he married Delphine Daffis, a publisher’s daughter with whom he had two sons and a daughter. In the same year, he rented out the Golden Pheasant and went to Paris to manage a catering company called ‘La Maison Chevet’ who saw to the great banquets held at the Palace.

In 1884, he moved to Monte Carlo to work there at the Grand Hotel, newly opened by César Ritz as Directeur de Cuisine. During the summer he worked in Lucerne at the Hotel National which was considered ‘the hotel to be seen at’ during the summer in Europe. 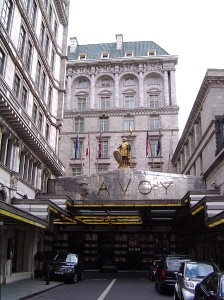 In 1890 he and César Ritz headed to the Savoy Hotel in London, owned by Richard D’Oyley Carte, the opera impresario, which Ritz and Escoffier re-opened in 1890.

In 1897, Escoffier and Ritz resigned from the Savoy owing to tensions with the board, and D’Oyley Carte’s wife and in 1896 opened their own company called the Ritz Hotel Development Company where Escoffier oversaw preparations for the opening of Ritz Hotel in the Place Vendôme, Paris that year.

In 1898, Escoffier returned to London to oversee the opening of the Carlton Hotel in London, which was to take much business away from the Savoy.

In 1904, Escoffier was asked by the Hamburg-Amerika ship line to plan the kitchens for their ocean liners. As part of his involvement, he even cooked for German Kaiser Wilhelm II on the ocean liner “Imperator.”

In 1907, his son Paul launched a line of commercially-bottled pickles and sauces under the company name of A. Escoffier Ltd, which were a very creditable success.

During the First World War he was at the Carlton Hotel where staff shortages reduced his team by a third and then came food shortages altered his menus. The first was meat and poultry so he switched to promoting venison, which was not rationed, braising it to make it tender. Fish was not rationed, but some types became hard to get and for the 40 salmon his restaurant required daily he bypassed the middle men and went direct to the Irish and Scottish fishermen.

His son Paul joined the British Expeditionary Force’s canteens, and eventually ran the officers’ club in Boulogne. Paul had been running Escoffier’s side business, A. Escoffier. Without Paul to run it, Escoffier found he couldn’t keep it up. He sold some aspects of the business, but kept control of the brand name Escoffier.

On Armistice Day, 11 November 1918, 712 people booked to have dinner at the Carlton. That the war had ended officially a few hours before did not instantly change Escoffier’s food supplies for later that day. For that night, he invented a dish called Mignonettes d’agneau Sainte-Alliance, small patties made from lamb, veal, pork and some chicken mixed with tinned foie gras and chopped truffle. 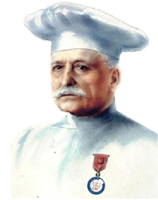 In November 1919, the French President Raymond Poincaré held a ceremony to vest awards on some of the French people living in London where Escoffier was presented with the Chevalier de la Légion d’Honneur, the first chef ever to receive this award. In 1920 he retired to Monte Carlo, at the age of 73, to be with his wife and family.

Escoffier popularized writing out meal menus in the order in which the items would be served. In the kitchen, he rationalised the division of work between teams, and scrubbed people’s image of a chef into one that was clean, meticulous, and that didn’t drink, smoke or scream. He created dishes such as

Tournedos Rossini, Melba Toast and Peach Melba. His cooking, though considered overly elaborate by today’s standards, was far simpler than it had previously been.

Considered the father of modern French cuisine, Escoffier is universally recognized as one of the finest master chefs of the 20th century.

Other of his many contributions to the culinary world include the à la Carte menu, a classification system for the “mother sauces”, and a move away from the ostentatious culinary traditions of French cuisine. He also streamlined professional kitchens into a station-based brigade system, still used today.