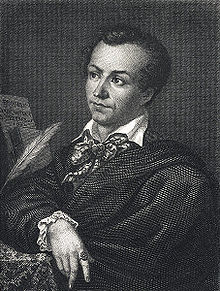 Marie-Antoine (Antonin) Carême, is often considered as one of the first internationally renowned celebrity chefs. To my mind there are two main contenders for the title of ‘King of Chefs, Chef of Kings’ and he is to be the first. The second is to be Georges-Auguste Escoffier (after which you may draw your own conclusions)

Carême, (8 June 1784 – 12 January 1833) an early practitioner and exponent of the elaborate style of cooking known as grande cuisine, was abandoned by his parents in Paris in 1794 at the height of The Terror, he found work as a kitchen boy at a cheap Parisian chophouse in exchange for room and board.

In 1798 at the age of fourteen, though even Carême himself was never entirely sure of his exact birth date, he was formally apprenticed to Sylvain Bailly, a famous pâtissier with a shop near the Palais-Royal in Paris. Bailly recognized Carêmes talent and ambition and by the time he was prepared to leave he could stipulate that he should be free to leave any new employer should a better offer came along. He opened his own shop, the Pâtisserie de la rue de la Paix and ran it until 1813. 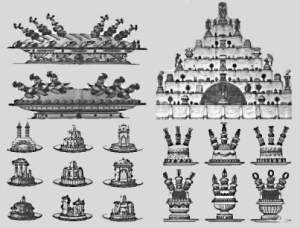 Carême gained fame in Paris for his pièces montées, highly complex and intricate confections that were used as centerpieces on the best 18th century dining tables which Bailly proudly displayed in the window of his pâtisserie for all to see. Sometimes several feet high and composed entirely of foodstuffs such as sugar, marzipan, and pastry, he modeled them on temples, pyramids, and ancient ruins. 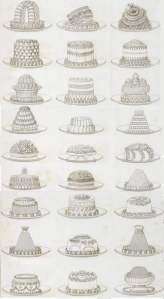 He did freelance work creating pieces for the French diplomat and gourmand Charles Maurice de Talleyrand-Périgord amongst others of Parisian high society. While working on his confections at many private kitchens, he quickly extended his culinary skills to main courses.

Napoleon was famously indifferent to food, but he understood the importance of social relations in the world of diplomacy. In 1804, he ordered Talleyrand to purchase the Château de Valençay, a large estate outside Paris, to act as a kind of diplomatic gathering place.

When Talleyrand moved there, he took Carême with him and set him the mammoth task of create a whole year’s menus, without repetition, and using only seasonal produce. Carême passed the test and completed his training in Talleyrand’s kitchens.

Talleyrand became a famous host during the Congress of Vienna, the diplomats of the Great Powers forged a new European order while growing fat on meals cooked by Carême.

In March 1811, Napoleon and his new wife, Marie Louise, invited the young Marie-Antoine, who had dazzled the court with their wedding cake, to create a christening cake for their newborn son. Using spun sugar, confectioner’s paste, cream, and meringues Carême created a magnificent replica of a Venetian gondola. The decadence of Napoleon’s court was a far cry from the gritty Left Bank slum that Carême had first called home.

After the fall of Napoléon, Carême went to London for a time and served as chef de cuisine to the Prince Regent, later George IV. Following an invitation from Tsar Alexander I he transferred to St. Petersburg but he lived there so briefly that he never actually prepared a meal for him. Returning to Paris, he became chef to the renowned banker James Mayer Rothschild.

Carême’s impact on culinary matters ranged from trivial to theoretical. He is credited with creating the standard chef’s hat, the toque; he designed new sauces and dishes, he published a classification of all sauces into groups, based on four mother sauces.

He is also frequently credited with replacing the practice of service à la française (serving all dishes at once) with service à la russe (serving each dish in the order printed on the menu) after returning from service in the Russian court. 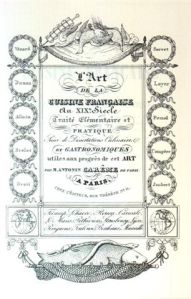 In September 1815 he published his first cookbook, Le Patissier royal parisien, two volumes at 400 pages each that consisted of recipes, menus, and charming stories from Carême’s adventures as chef to the rich and titled.

In later years, his body ailing from the effects of inhaling the toxic fumes, Carême devoted himself to writing. Shortly before his death, he completed the five-volume L’Art de la cuisine francais au 19eme siècle (1833) which includes essays on food, menus, thousands of recipes, and accounts of epic meals. His feat accomplished, Carême died in January 1833, in his house on the Rue Neuve Saint Roche at the age of only 48, possibly due to too many years inhaling the toxic fumes of the charcoal on which he cooked.

He is remembered as the founder of the haute cuisine concept and is interred in the Cimetière de Montmartre in Paris.

(The cuisine of France)

This entry was posted in Celebrity Cooks, The Evolution Of . . . and tagged Careme, classical cusine, cuisine of France, Escoffier, grande cuisine, Napoleon, Tallyrand. Bookmark the permalink.