Norfolk (/ˈnɔrfək/) is a low-lying county in the East of England. It has borders with Lincolnshire to the west, Cambridgeshire to the west and southwest and Suffolk to the

Its northern and eastern boundaries are the North Sea coast and to the north-west the county is bordered by the Wash. The city of Norwich is the county town of Norfolk, which is the fifth largest county in England, with an

Of the English counties, Norfolk is the seventh most populous, with a population of 859,400. However, as a largely rural county it has a low population density: 401 per square mile.

‘The Broads’, a well known network of rivers and lakes, is located towards the county’s east coast, extending south into Suffolk. The area has the status of a National Park and is protected by the Broads Authority.

Historical sites, such as those in the centre of Norwich, also contribute to tourism.

Norfolk was settled in pre-Roman times, with camps along the higher land in the west where flints could be quarried. A Brythonic tribe, the Iceni, inhabited the county from the 1st century BC to the end of the 1st century AD.

The Iceni revolted against the Roman invasion in 47 AD, and again in 60 AD led by Boudica. The crushing of the second rebellion opened the county to the Romans. During the Roman era in Norfolk roads and ports were constructed throughout the county.

Situated on the east coast, Norfolk was vulnerable to invasion from Scandinavia and Northern Europe, and forts were built to defend against the Angles and the Saxons.

By the 5th century the Angles, after whom East Anglia and England itself are named, had established control of the region and later became the “north folk” and the “south folk”, hence, “Norfolk” and “Suffolk”.

Norfolk, Suffolk and several adjacent areas became the kingdom of East Anglia, which later merged with Mercia and then Wessex. The influence of the Early English settlers can be seen in the many place names ending in “-ton”, and “-ham”. Endings such as “-by” 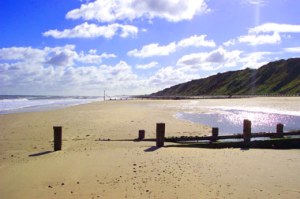 or “-thorpe” are also common, indicating Danish place names. In the 9th century the region again came under attack, this time from Danes who killed the king, Edmund the Martyr.

In the centuries before the Norman Conquest the wetlands of the east of the county began to be converted to farmland, and settlements grew in these areas. Migration into East Anglia must have been high as by the time of the Conquest and Domesday Book survey it was one of the most densely populated parts of the British Isles.

During the high and late Middle Ages the county developed arable agriculture and woollen industries. Norfolk’s prosperity at that time is evident from the county’s large number of medieval churches: of an original total of over one thousand, 659 survive, more than in the whole of the rest of Great Britain.
The economy was in decline by the time of the Black Death, which dramatically reduced the population in 1349 and again in 1579 when over one-third of the population died. But by the end of the 16th century Norwich had grown to become the second largest city in England until, in 1665, the Great Plague again killed around one third of the population. (though obviously not the same third, that would just be silly!) 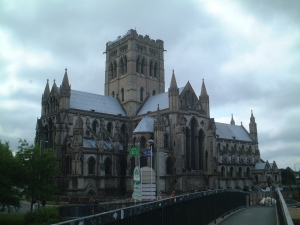 During the English Civil War Norfolk was largely Parliamentarian. The economy and agriculture of the region declined somewhat. During the Industrial Revolution Norfolk developed little industry except in Norwich and was a late addition to the railway network.

In the 20th century the county developed a role in aviation. The first development in airfields came with the First World War; there was then a massive expansion during the Second World War with the growth of the Royal Air Force and the influx of the American USAAF 8th Air Force which operated from many Norfolk Airfields. During the Second World War agriculture rapidly intensified, as in many arable areas, in an effort to feed the population during the period of shortages and rationing. And it has remained very intensive ever  since with the establishment of large fields for growing cereals and oil seed rape.

Norfolk’s low-lying land and easily eroded cliffs, many of which are chalk and clay, make it vulnerable to the sea, the most recent major event being the North Sea flood of 1953. The low-lying section of coast between Kelling and Lowestoft Ness in Suffolk is currently managed by the Environment Agency to protect the Broads from sea flooding. Natural England have contributed some research into the impacts on the environment of various realignment options. The draft report of their research was leaked to the press, who created great anxiety by reporting that Natural England plan to abandon a large section of

the Norfolk Broads, villages and farmland to the sea to save the rest of the Norfolk coastline from the impact of climate change.
Important business sectors include tourism, energy (oil, gas and renewables), advanced engineering and manufacturing, and food and farming. Much of Norfolk’s fairly flat and fertile land has been drained for use as arable land. The principal arable crops are sugar beet, wheat, barley (for brewing) and oil seed rape.

Over 20% of employment in the county is in the agricultural and food industries. Well-known companies in Norfolk are Aviva (formerly Norwich Union), Colman’s (part of Unilever) and Bernard Matthews Farms.

The Construction Industry Training Board is based on the former airfield of RAF Bircham Newton.

The BBC East region is centred on Norwich, although it covers an area as far west as Milton Keynes; the BBC does however provide BBC Radio Norfolk solely for the county.

The Norfolk dialect is also known as “Broad Norfolk”, although over the modern age much of the vocabulary and many of the phrases have died out due to a number of factors, such as radio and TV. As a result, the speech of Norfolk is more of an accent than a dialect, though one part retained from the Norfolk dialect is the distinctive grammar of the region.

People from Norfolk are sometimes known as Norfolk Dumplings, an allusion to the flour dumplings that were traditionally a significant part of the local diet. More cutting, perhaps, was the pejorative medical slang term “Normal for Norfolk”, alluding to the county’s perceived status as an illiterate incestuous backwater. The term has never been official, and is now thoroughly discredited, its use discouraged by the profession.

Norfolk is a popular tourist destination and has several major examples of holiday attractions. There are many seaside resorts, including some of the finest British beaches, such as those at Great Yarmouth, Waxham, Cromer and Holkham. Norfolk also contains the Broads and other areas of outstanding natural beauty and many areas of the coast are wild bird sanctuaries and reserves with some areas designated as National Parks. 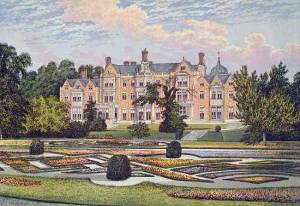 The Queen’s residence of Sandringham House in Sandringham, Norfolk provides an all year round tourist attraction whilst the coast and some rural areas are popular locations for people from the conurbations to purchase weekend holiday homes. Arthur Conan Doyle first conceived the idea for The Hound Of The Baskervilles whilst holidaying in Cromer with Bertram Fletcher Robinson after hearing local folklore tales regarding the mysterious hound known as Black Shuck.

Thrigby Hall near Great Yarmouth was built in 1736 by Joshua Smith Esquire and features a zoo which houses a large tiger enclosure, primate enclosures and the swamp house which has many crocodiles and alligators. Great Yarmouth Pleasure Beach is a free-entry theme park, hosting over 20 large rides as well as a crazy golf course, water attractions, children’s rides and “white knuckle” rides. Britannia Pier on the coast of Great Yarmouth has rides which include a ghost train. Also on the pier is the famous Britannia Pier Theatre. Extreeme Adventure is a high ropes course built in some of the tallest trees in eastern England. In the ‘New Wood’ part of Weasenham Woods, Norfolk. 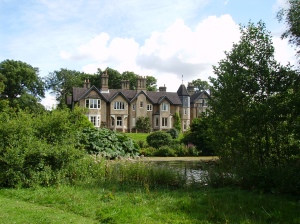 The Gorleston Pavilion (Gorleston) is an original Edwardian theatre building with a seating capacity of 300, situated on the Norfolk coast. The theatre stages plays, pantomimes, musicals, concerts as well as the popular 26 week summer season.

Henry Blogg, the UK’s most decorated lifeboatman, who was from Cromer
Boudica, scourge of the occupying Roman Army in first century Britain and queen of the Iceni, a British tribe occupying an area slightly larger than modern Norfolk.
Prasutagus, 1st-century king of the Iceni, who occupied roughly the area which is now Norfolk
Adam Thoroughgood, colonial leader in Virginia, namer of New Norfolk County, which later became Norfolk, Virginia.
Howard Carter, the archaeologist who discovered Tutankhamun’s tomb; his childhood was spent primarily in Swaffham
Diana, Princess of Wales, first wife of Charles, Prince of Wales, was born and grew up near Sandringham. (see above)
Elizabeth Fry, prominent 19th century Quaker prison reformer pictured on the Bank of England £5 note, born and raised in Norwich 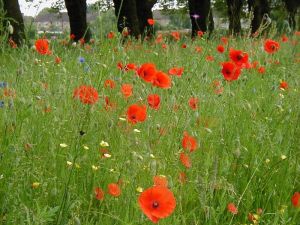 Julian of Norwich, mediaeval mystic, born probably in Norwich in the mid 14th century and lived much of her life as a recluse in Norwich. (aka : Alan Partridge)
Horatio, Lord Nelson, Admiral and British hero who played a major role in the Battle of Trafalgar, born and schooled in Norfolk.
The county flower of Norfolk is the Poppy.

This entry was posted in Counties Of England and tagged Nelson, poppy, Princess Diana, Sandringham. Bookmark the permalink.