The county town is

Hertford. Hertfordshire was the area assigned to a fortress constructed at Hertford under the rule of Edward the Elder in 913. The name Hertford is derived from the Anglo-Saxon heort ford, meaning deer crossing (of a watercourse).

The name Hertfordshire is first recorded in the Anglo-Saxon Chronicle in 1011. Because of their abundance, as either food or clothing, deer are prominent in many county emblems.

There is evidence of humans living in Hertfordshire from the Middle Stone Age. It was first farmed during the Neolithic period and permanent habitation appeared at the beginning of the Bronze Age. This was followed by tribes settling in the area during the Iron Age. 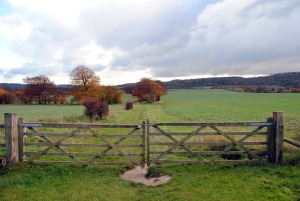 Following the Roman conquest of Britain in AD 43, the aboriginal Catuvellauni quickly submitted and adapted to the Roman life; resulting in the development of several new towns, including Verulamium (St Albans).

It was here in c. 293 that the first British martyrdom took place. St. Alban, an Anglo-Roman soldier, took the place of a Christian priest and was beheaded on 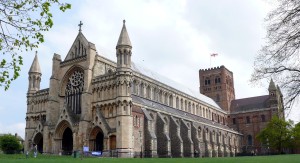 Holywell Hill. His martyr’s cross of a yellow saltire on a blue background is reflected in the flag and coat of arms of Hertfordshire as the yellow background to the stag or Hart representing the county. St Alban is the Patron Saint of Hertfordshire. 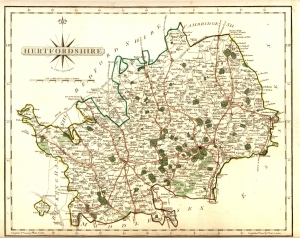 With the departure of the Roman Legions in the early 5th century, the now unprotected territory was invaded and colonised by the Anglo-Saxons. By the 6th century the majority of the modern county was part of the East Saxon kingdom. 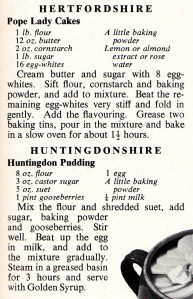 This relatively short lived kingdom collapsed in the 9th century, ceding the territory of Hertfordshire to the control of the West Anglians of Mercia. The region finally became an English shire in the 10th century, on the merger of the West Saxon and Mercian kingdoms. 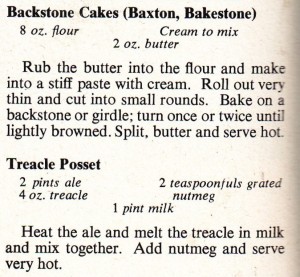 A century later a victorious William I received the surrender of the surviving senior English Lords and Clergy, at Berkhamsted, resulting in a new Anglicised title of William the Conqueror. He then embarked on an uncontested entry into London and coronation at Westminster. 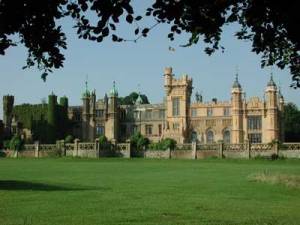 The Domesday Book recorded the county as having nine hundreds. Tring and Danais became one, Dacorum, from (Danis Corum or Danish rule harking back to a Viking not Saxon past). The other seven were Braughing, Broadwater, Cashio, Edwinstree, Hertford, Hitchin and Odsey.

As London grew, Hertfordshire became conveniently close to the English capital; much of the area was owned by the nobility and aristocracy, this patronage helped to boost the local economy. However, the greatest boost to Hertfordshire came during the

Industrial Revolution, after which the population rose dramatically.

In 1903, Letchworth became the world’s first garden city and Stevenage became the first town to redevelop under the New Towns Act 1946.

From the 1920s until the late 1980s, the town of Borehamwood was home to one of the major British film studio complexes, including the MGM-British Studios. Many well-known films were made here including the first three Star Wars movies (IV, V, & VI). The studios generally used the name of Elstree (the adjoining village). American director Stanley Kubrick not only used to shoot in those studios but also lived in the area until his death. In more recent times, Elstree has had the likes of Big Brother UK and Who Wants To Be A Millionaire? filmed there. EastEnders is also filmed at the studios. 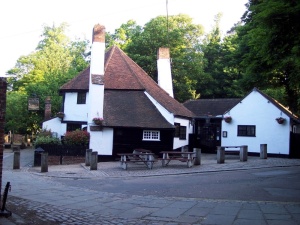 The Harry Potter series and the 1996 James Bond film GoldenEye was filmed there at Leavesden Film Studios, developed on the Leavesden Aerodome site, north of Watford.

Hertfordshire affords habitat for a variety of flora and fauna. One bird common in the shire is the Royston Crow, which is the eponymous name of the regional newspaper, the Royston Crow which is published, 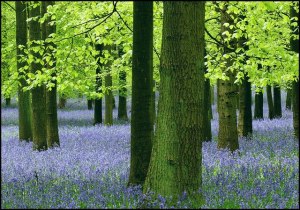