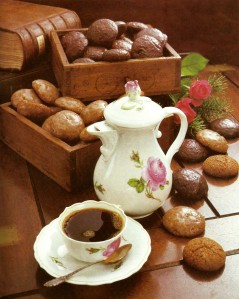 Pfeffernüsse are fluffy pastries made with ground nuts and spices, somewhat akin to maccaroons.

Like the spekulatius, the biscuit has been part of European yuletide celebrations since the mid nineteenth century.

Popular in Germany, Denmark, and The Netherlands as a treat for the feast of St Nicholas or Sinterklaas, (Dec. 5th in Holland and the 6th in both Belgium and Germany) 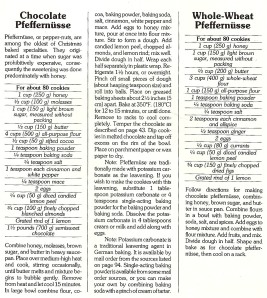 They are better known as pepernoten in Dutch, päpanät in Platdeutsch, pfeffernüsse in German, peppernuts in English and pebernødder in Danish.

While the exact origin of the biscuit is still uncertain, the traditional Dutch belief links the pepernoten to the feast of Sinterklaas.

In Germany, the pfeffernüsse is more closely associated with the traditional Feast of Christmas.