Gloucestershire is mentioned in the Anglo-Saxon Chronicle in the 10th century, which originally included Bristol, then a small town. As Bristol’s population growth accelerated exponentially during the industrial revolution and the coming of the railways in the eighteenth and nineteenth centuries, Bristol, with Avon, became a county in its own right, separate from Gloucestershire and Somerset.

The county town is Gloucester, a cathedral city, close to the Welsh border. The existence of a British settlement at Gloucester (Caer Glow, Gleawecastre, Gleucestre) is not confirmed by any direct evidence but Gloucester was founded in AD 97 by the Romans under Emperor Nerva as Colonia Glevum Nervensis. Parts of the walls can be traced, and many remains and coins have been found, though inscriptions are scarce. 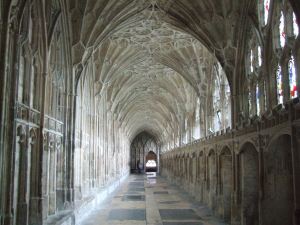 The name Gloucester derives from the Anglo-Saxon for fort (Old English ceaster) preceded by the Roman stem Glev- (pronounced glaiw). Captured by the Saxons in 577, its situation on a navigable river, favoured the growth of the town.

In 681 of the abbey of St Peter was built by Æthelred. There was also a castle which was frequently a royal residence, and a mint. In the early tenth century the remains of Saint Oswald were brought to a small church in Gloucester, bringing many pilgrims to the town. 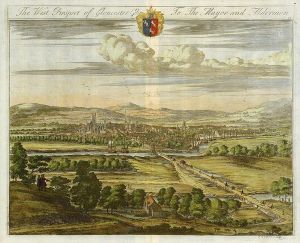 The first Earl of Gloucester, Earl Godwine. In 1155, Henry II granted the first charter to Gloucester which gave the citizens the same liberties as those of London and Winchester. In 1194 Henry II granted a second charter giving gave them freedom of passage on the River Severn.

In 1200, the privileges of the borough were greatly extended by the charter of King John which gave freedom from toll throughout the kingdom. The main export was wool, from the Cotswolds. Other exports included leather and iron, used for tools and weapons and there was a large fishing industry. 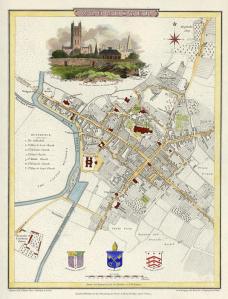 In 1483 the city was incorporated by King Richard III and became itself a county and later, in 1580 it was awarded the status of a port by Queen Elizabeth I. The Siege of Gloucester in 1643 was a fairly significant battle of the English Civil War.

More recently, in July 2007, Gloucester was hit badly by a flood that struck all of Gloucestershire and its surrounding areas. Hundreds of homes were flooded, but the event was most memorable because of its wider impact – about 40,000 people were without power for 24 hours, and the entire city was without piped water for 17 days. The RAF conducted the largest peace time domestic operation in its history to rescue over 120 residents from the worst affected areas and the damage was estimated at over £2 billion. 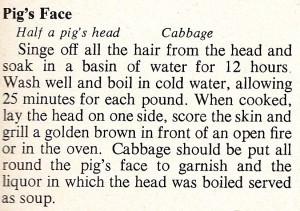 A traditional dish using Double Gloucester is Gloucester Cheese and Ale (above) which is a variation on Welsh Rarebit. It also makes a very good Potted Cheese when equal quantities of unsalted butter and grated cheese are mixed and moistened with port or sherry, add a little cayenne pepper to taste. Beat until smooth then press into little pots and coat the top with clarified butter. 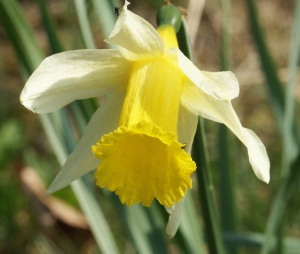 A traditional celebration at the spring bank holiday in some Gloucestershire villages is ‘cheese-rolling’. A cheese is packed in a strong wooden case and rolled down a steep hill with the competitors chasing after it. The winner gets to keep the cheese. Attempts to ban it for safety reasons have been overridden by local enthusiasts.

The county flower of Gloucestershire is the Wild Daffodil.

This entry was posted in Counties Of England and tagged cheese rolling, coat of arms, crest, flag, Wales. Bookmark the permalink.