On the theme of novelty cakes once again here are a few more ideas from the  Woman’s Own Book with some quite diverse examples.

Although a bunny tends to be symbolic of Easter, there is no reason why it should not serve equally well as a child’s birthday cake.

Another is the Zodiac Cake, another fairly outdated idea these days, though the symbolism is buried deep in the racial psyche.

The influence of the moon and the stars on earthly matters has been the bed-rock of many pagan belief systems over the centuries. What is it they say? There’s no smoke without fire.

On a similar antiquated theme, that of the Court Jester, later to become the clown, that later became a figure of fun for the amusement of children. 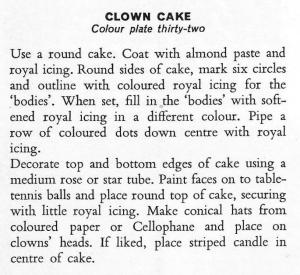 The word has only been in usage for at most thirty years and the causes are still unclear but it is thought to be the element of the unpredictable, of the unseen menace that causes the negative reaction. 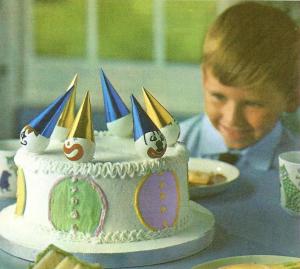 And finally, on the theme of antiquated customs this has to be one of the least offensive! St Valentines Day. 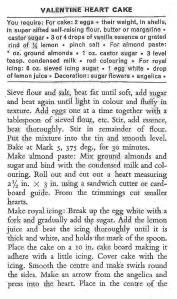 Objection could be made on behalf of those who cannot find an appropriate life/love partner.

But be that as it may, these quaint cakes could still be reinvented as a  birthday cake for those more squeamish!

Although this one also brings in the older symbolism of the arrow firing cupid, a ‘cutesy baby’ character or match-maker who brings couples together.

Anyway so much for symbolism. To finish here is a rather pretty Rose Cake. I mean there can’t be anything deeply significant or troubling about a simple, honest to goodness rose now can there . . .