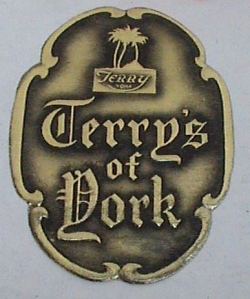 Although production of Terry’s products was to continue at other factories and plants across Europe, it was the end of an era.

Joseph Terry, was born on 11th November 1793 in Pocklington, Yorkshire.

Petergate, York, with the Minster in the background c.1850

As a teenager he moved to York where he was apprenticed to an apothecary in Stonegate, before setting up his own chemist shop in Walmgate.

Robert Berry, a relative of Harriet Terry, had a small confectionery business in St Helen’ Square. It was not long before Terry gave up his chemist business in Walmgate to join Berry. When, shortly afterwards, Robert Berry died, his son George joined Joseph in his business under the quaintly amusing name of Terry & Berry.

Joseph Terry – The York Directory of 1826

George was to leave the business in 1828. On his own, Joseph Terry continued the business, and before long was beginning to gain a reputation for cakes, sweets, candied peel, marmalade and medicated lozenges.

The coming of the railways to York in 1839 proved a God-send to Joseph Terry and his growing ambitions. 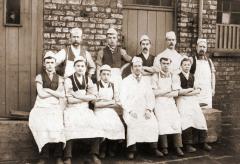 sending his products to towns across Northern England, the Midlands and even down to Luton and London.

By the time of his death in 1850, the Terry name was becoming known around Britain.

Joseph junior, who began working for his fathers company in 1851, and his brothers took 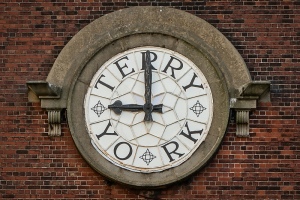 control of the business in 1854 but it was Joseph who took the lead in building on already firm foundations and expanding the business into a major concern.

In 1854, Joseph married Frances Goddard and they had three sons. After her death in 1866 he then  married Margaret Thorpe in 1871 with whom he had three daughters and another son.

In 1864, he built a new steam powered factory at Clementhorpe (above) in York, next to the River Ouse.  In the same way that his father had used the railway to further the business, Joseph saw the benefits of having easy access to the Humber estuary and North Sea.

Sugar, cocoa and other ingredients, as well as coal for the steam-powered machinery, were brought in twice a week on steam boats.  His brothers, Robert and John died in 1871 and 1874, and although both had children, none of their descendents entered the company. 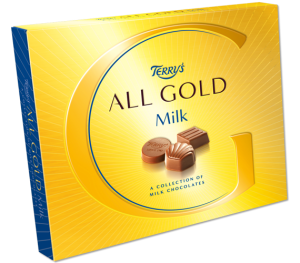 Although many of the company’s products were chocolate based, Terry’s only became established as a chocolate maker in 1886 when Joseph built a new factory specifically for their chocolate products. The company applied for its first trademark in 1876, ‘Joseph Terry’s and Sons’ and by 1895 it had 300 employees.

His eldest son Thomas, born in 1855 and his youngest son Francis born in 1878 both entered into the family business. On his death in 1898 they took control of the company and between them they developed the company into a business for the 20th Century. The price list of 1867 had 400 items but, at that time, only 13 were chocolate.

In 1926, Terry’s moved to a purpose-built factory off Bishopthorpe Road (see above) from where uncle and nephew introduced the famous ‘All Gold’ chocolate collection in

Terry’s was taken over by United Biscuits in 1973, and later by Kraft who subsequently closed it. The original St Helen’s Square premises were retained and the name Terry is on the front of the building to this day.

This entry was posted in Counties Of England, The Evolution Of . . . and tagged All Gold, baking, chocolate, Chocolate Orange, marmelade, railways, traditional. Bookmark the permalink.