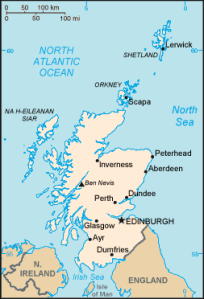 With today being St David’s day, whereby the Welsh St David is publicly lauded I thought that I would give another St David some kudos.

This David was the youngest of the six sons of King Malcolm III (who deposed Macbeth) and St Margaret, the grand-daughter of the English king Edmund Ironside.

In 1100 his sister married Henry I of England and in 1107 he succeeded one of his brothers brother as Prince of Cumbria (which then comprised south-west Scotland and Cumberland)  until in 1124 when he succeeded to the Kingdom of Scotland.

King David I (1085-1153) oversaw the continuing development of the Scottish state and the organisation of Christianity within it. To that end David established the bishoprics of Brechin, Dunblane, Caithness, Ross and Aberdeen, and founded numerous monasteries including the Cistercian houses of Melrose, Kinloss, Newbattle and Dundrennan, while at Holyrood he built an abbey for Augustinian canons. Effectively he purged the last vestiges of Celtic Christianity and brought the Church in Scotland more directly under Roman influence. 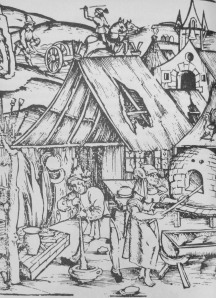 After the death of Henry I in 1135 David fought to establish his niece Matilda on the English throne, only to be defeated at the Battle of the Standard in 1138.
After 1141 when he concentrated his attentions on the affairs of his own kingdom.

St Aelred left a full account of David’s death, on Sunday May 24 1153.
“On Friday the King had received the last rites, after which he spent the rest of the day reciting the psalms with his attendants. On Saturday he was urged to rest, but would have none of it : ‘Let me rather think about the things of God,’ he insisted, ‘so that my spirit may set out strengthened on its journey from exile to home. When I stand before God’s tremendous judgment seat, you will not be able to answer for me or defend me; no one will be able to deliver me from his Hand’ 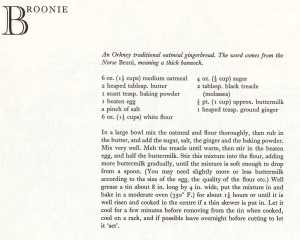 David later became a saint by popular acclamation and even after the Reformation, his name was included in the calendar of Archbishop Laud’s 1637 prayer-book for Scotland.
In his honour I give here a recipe for Broonie, a type of Parkin, which is essentially an stodgy oatmeal and ginger cake.