Posted on February 1, 2013 by kayjayaitch

Surrey is a county in the South East of England, and is one of the home counties. It borders Greater London, Kent, East Sussex, West Sussex, Hampshire, and Berkshire. The historic town of Guildford is the county town.

Following the fateful Battle of Hastings, the Norman army advanced through Kent into Surrey, where they defeated an English

force that attacked them at Southwark. Defeating them, the Norman’s continued westwards on a roundabout approach to London from the north.

In the aftermath the native ruling classes of Surrey were virtually eliminated during the seizure of land by the invaders. By the time of the Domesday survey, conducted in 1086, the largest landholding in Surrey belonged to the royal estate

The stronghold of Guildford Castle is one of many fortresses established by the Normans in an effort to subjugate the country and was developed as a royal palace in the 12th century. Other stone castles were constructed in the same period at Bletchingley and  Reigate.

Under King John, the Magna Carta was issued in June 1215 at Runnymede. Guildford Castle later became one of the favourite residences of King Henry III, who considerably expanded the palace there. Following his death, a Dominican friary was established at Guildford by his widow Eleanor of Provence. Sadly it was to perish, along with the important Benedictine abbey of Chertsey, in the 16th-century Dissolution of the Monasteries. 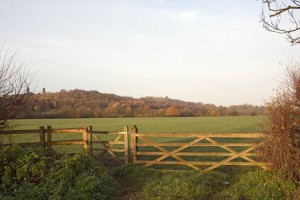 By the 14th century castles were dwindling in military importance though they continued to be built as ostentatious, and expensive, displays of social standing! But Surrey had little political or economic importance during the Middle Ages because there was no major aristocratic family or bishopric within its borders and its agricultural wealth was limited by its generally poor soils and population pressures.

Despite that, in the later Middle Ages, Surrey did achieve a significant degree of prosperity through its role in the production of woollen cloth, England’s main export industry, which in Surrey centred on Guildford.

Surrey’s cloth industry had and collapsed by the 17th century though the introduction of new furnace technology led to an expansion of the iron industry in the Weald but this was only brief as the mines were soon worked out. But important new industries, centred on the valley of the Tillingbourne led to an upturn in fortunes.

The production of brass goods and wire in this area was relatively short-lived, but the manufacture of paper and gunpowder proved more enduring and for a time in the mid-17th century the Surrey mills were the main producers of gunpowder in Europe. The Wey Navigation, opened in 1653, was one of England’s first canal systems.

Until the late 18th century Surrey remained sparsely populated and somewhat rustic, despite its proximity to the capital.

With the influence of London increasing, the development of turnpike roads and a stagecoach system followed by the arrival of the railways, beginning in the late 1830s enabled more prosperous London residents and workers to travel daily to homes across Surrey. The phenomenon of commuting brought explosive growth to Surrey’s population and wealth, and tied its economy and society inextricably to London. Existing towns like Guildford, Farnham and most spectacularly Croydon grew rapidly, while new towns such as Woking and Redhill emerged beside the railway lines.

During the late 19th and early 20th centuries Surrey’s long-standing industries manufacturing paper and gunpowder were waning and most of the county’s paper mills closed around the turn of the century while gunpowder fell victim to the First World War, which brought about a huge expansion of the British munitions industry, followed by sharp contraction when the war ended. More latterly, new industrial developments have included the establishment of the vehicle manufacturers Dennis Brothers in Guildford in 1895. Beginning as a maker of bicycles and then of cars, the firm soon shifted into the production of commercial and utility vehicles, becoming internationally important as a manufacturer of fire engines and buses. Though much reduced in size and despite numerous changes of ownership, this business continues to operate in Guildford.

Although now fallen into disuse, some English counties had nicknames for people from that county and the traditional nickname for people from Surrey is ‘Surrey Capon’ because in the later Middle Ages was the county where chickens were fattened up for the London markets.

This entry was posted in Counties Of England and tagged gooseberry flan, kidney, maids of honour, mullet, sausager, traditional. Bookmark the permalink.