Eggs have been on the menu since the dawn of time. There is archaeological evidence for egg consumption dating back to the Neolithic age. Their history as a foodstuff is as complex and diverse as the recipes they contribute to.

Many different eggs are eaten around the world with Ostrich and chicken being the most common. Easy to obtain and an excellent source of protein they are adaptable to numerous methods of cooking including boiling, frying, poaching, scrambling, baking and wrapping.

They are ideal for the meatless fasting days required by some religions and have been the object of much socio-religious symbolism and tradition along the way.

Some groups have encouraged the consumption and decoration of eggs in celebration of certain events while others have decided eggs are a filthy food to be avoided. 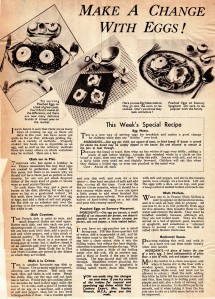 At some time in the early history of man, the jungle fowl was perceived as a source both of meat and of eggs. It was discovered that by removing some eggs from the nest would induce the female jungle fowl to lay additional eggs.

The egg can trace its name back to a prehistoric Indo-European source and is related to words for ‘bird’. The Old English term was oeg, which survived in Middle English as ey but in the 14th century the word egg was borrowed from the Old Norse. Egg and ey were in competition for for many decades with the Norse form emerging as the winner in the 16th century.

The ancient Romans ate peafowl eggs, the Chinese had a yen for pigeon eggs while the Phoenicians were partial to an Ostrich egg. Other eggs consumed by various ethnic groups include those from plovers, quail, partridge, gulls, turkeys, pelicans, ducks, and geese.
Turtle eggs have been highly prized and even those of alligators, have been relied upon when times were hard.

There is evidence that breads and cakes using eggs were made both in Ancient Egypt and Rome. The reason most often given is that eggs work as a binding or thickening agent.

Farming the prolific chicken has allowed us to make eggs a part of our diet without harming its reproductive cycle. Chickens lay eggs based on the hours of sunlight they are exposed to. If there is no intervention, this means they can lay an egg a day in the summer, but fewer in spring and autumn and very few in winter.

The eggs available to buy in shops and supermarkets are produced by continuously exposing the chickens to a light that replicates the sunlight effect thus keeping the rate of production at summer levels throughout the year.

The modern poultry industry began in the late 19th century and the innovations in scientific housing, feeding and breeding led to the rapid expansion of the industry after the 1930’s.

The production and consumption of poultry and poultry products increased markedly during World War II when meat from other livestock was scarce. Even the use of dried eggs became more common.

Since 1945, improved methods of storing and distributing poultry meat and eggs have helped stimulate consumption of these foods.

This entry was posted in Bakery, Cakes, The Evolution Of . . . and tagged baking, chicken, eggs, history. Bookmark the permalink.