The forerunner of today’s Lebküchen was called the “honey cake” and its history can be traced back to the Egyptians, the Greeks, and the Romans.

They believed that honey, the only sweetener widely available to them, was a gift of the Gods and had magical and healing powers.

Honey cakes were also worn as a talisman in battle or as protection against evil spirits! But be that as it may . . .

Invented by medieval monks in Franconia, Germany in the 13th century, Lebküchen bakers were recorded as early as 1296 in Ulm, and 1395 in Nürnberg.

Lebküchen dough is usually placed on a thin wafer base called Oblate. This was an idea of the monks, who used unleavened communion wafer ingredients to prevent the dough from sticking. Typically, they are glazed or covered with very dark chocolate, but some are left uncoated.

Lebküchen range in taste from spicy to sweet and come in a variety of shapes with round being the most common. The ingredients usually include honey, spices such as aniseed, coriander, cloves, ginger, cardamom, and allspice, nuts including almonds, hazelnuts, and walnuts. 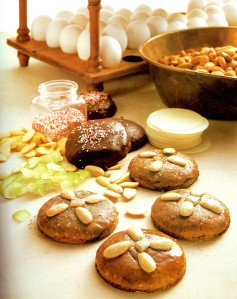 Since 1808, a variety of Nürnberg Lebküchen made without flour has been called Elisen-lebküchen.

It is uncertain whether the name Elise refers to the daughter of a gingerbread baker or the wife of a margrave.

Her name is associated with some of the Lebküchen produced by members of the guild. Since 1996, Nürnberger Lebküchen is a Protected Designation of Origin and must be produced within the boundaries of the city.