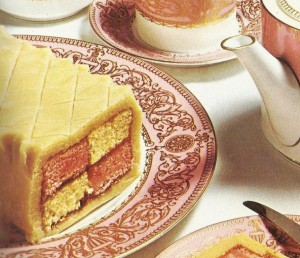 Though not essentially a Christmas recipe, the Battenburg follows the German style of marzipan and bright colours. The British Royal Family were introduced to it during the reign of Queen Victoria.

The first Battenberg Cake was created in 1884 by the chef’s to the royal household to celebrate the wedding of Queen Victoria’s granddaughter, Princess Victoria of Hesse and by Rhine, to her husband Prince Louis of Battenberg and named after him.

However, anti-German resentment during the First World War led Prince Louis to anglicise his name from Battenberg to Mountbatten.

Despite that the cake named after him continued to be called a Battenberg.

The first Battenberg was made of an almond flavoured sponge, half of which was dyed pink. The sponge was then cut into four lengths and formed into an oblong cake, held together with apricot jam, like a checkerboard. The cake is then wrapped in marzipan, with more apricot jam to ensure that the cake holds together.

Variations include coconut flavouring to the sponge cake and lemon curd or raspberry jam instead of the apricot. 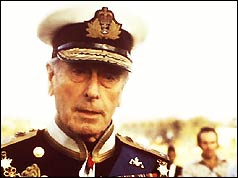 Admiral of the Fleet Louis Francis Albert Victor Nicholas George Mountbatten, 1st Earl Mountbatten of Burma KG GCB OM GCSI GCIE GCVO DSO PC FRS (born Prince Louis of Battenberg; 25 June 1900 – 27 August 1979), was a British statesman and naval officer, an uncle of Prince Philip, Duke of Edinburgh and second cousin once removed to Elizabeth II. He was the last Viceroy of India (1947) and the first Governor-General of the independent Union of India (1947–48), from which the modern Republic of India emerged in 1950. From 1954 until 1959 he was the First Sea Lord, a position that had been held by his father, Prince Louis of Battenberg, some forty years earlier. Thereafter he served as Chief of the Defence Staff until 1965, making him the longest serving professional head of the British Armed Forces to date. During this period Mountbatten also served as Chairman of the NATO Military Committee for a year.
In 1979, Earl Mountbatten was killed by the Provisional Irish Republican Army (a.k.a. IRA), who planted a bomb in his yacht, the Shadow V, at Mullaghmore, County Sligo, in Ireland.