The principal reason for this is that the dull, grey, washed out existence of prison life is supposedly the equivalent of a constant diet of porridge.

Indeed, generations of Scots children in both public and private schools were raised on the stuff!

There is one, more than likely apocryphal, tale of a medical student in Edinburgh in the thirties who, on a strictly limited budget, would cook up huge batches of the ubiquitous stewed oats, set them into a paper lined drawer and live off of the cold porridge.

His name was Stewart Jameson, though as I say it is more than likely apocryphal, and he became the first case of scurvy (a condition brought about by a severe lack of vitamins and minerals in the diet) recorded in Scotland for over twenty years. 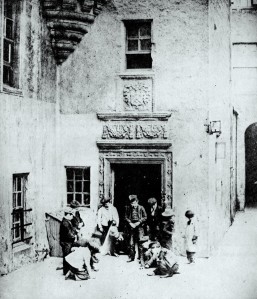 But like it or loathe it, porridge has a long tradition in Scotland and remains still a staple on the breakfast table of many a household throughout the UK.

Traditionally it is made with oats, water and salt. The addition of milk, cream, sugar and jam are considered by porridge purists to be nothing short of adultery!

Be that as it may, many people still consider a bowl of steaming porridge on a cold, wintery morning to be the best possible start to the day. For young and old alike!

This entry was posted in Scotland and tagged breakfast, oals, porridge, Scotland. Bookmark the permalink.