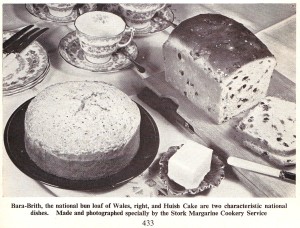 These recipes come from a volume produced by the Milk Board sometime during the early sixties and hark back to traditional dishes originating from the Kingdom of Wales. Each of the four countries that compose the United Kingdom have their own national saint.

In recent years Saint Patrick has tended to over-shadow the other three with a large, world-wide following due to the global migration of thousands of Irish citizens over the centuries.

But if you are lucky enough to find yourself in Wales on 1st March you will find the country in festive mood.

Every self-respecting man, woman and child will be celebrating St. David’s Day in one way or another.

St. David’s Day is a time of great celebration in Wales. In St. David’s Hall, Cardiff, each March 1st, there will be a concert featuring a 1000-member male voice choir, specially formed for the occasion.

But who was St. David, and why is he so important to the Welsh? There is a little known about his early life. Of royal lineage, his father, Sant, was the son of Ceredig, a prince of Ceredigion, a region in South-West Wales while his mother, Non, was the daughter of a local chieftain. Legend has it that Non was also a niece of King Arthur.

David was educated in a monastery called Hen Fynyw, his teacher being Paulinus, a blind monk. He was a very gentle person who lived a frugal life and it is claimed that he ate mostly bread and herbs, probably watercress, which was widely used at the time. Despite this supposedly meagre diet, it is reported that he was tall and physically strong.

He is sometimes known, in Welsh, as ‘Dewi Ddyfrwr’ (David the Water Drinker) and, indeed, water was an important part of his life – he is said to have drunk nothing else. Sometimes, as a self-imposed penance, he would stand up to his neck in a lake of cold water, reciting Scripture.

An early form of puritanism perhaps!

During his life several events were marked by the appearance of springs of water.
St David’s Day, as celebrated today, dates back to 1120, when David was canonised by Pope Callactus II, and March 1st was included in the Church calendar. It continued to celebrated, until the Reformation, as a holy day. It is generally accepted that he died in 589 and was buried in the grounds of his own monastery, where the Cathedral of St. David now stands.

This entry was posted in The Evolution Of . . . and tagged baking, Bara-Brith, bread, fruit, St David, traditional, Wales. Bookmark the permalink.