With next week being National Pie Week I have pulled together a couple of traditional British Pies from the archives.

I believe this particular recipe to be one of my Grandmothers, though I’m unsure by who or when it may have been typed but it was clearly not a professional typist.

It is obviously a new ribbon or a heavy handed person at the typewriter! 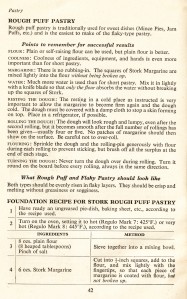 The pastry recipe comes from the Stork cookbook, though other butters and margarines will work equally well.

And for those not interested or too unsure about making their own puff pastry, there are many proprietary brands available on the supermarket shelves that are more than worthy of consideration.

One alternative for this

recipe would be to use a short pastry, or to use a suet pastry and  make it into a steamed pudding!

But, National Pie week should do what it says on the tin and so I’ll go along with the original premise!

I’ve also come across a rather unusual recipe for Eel Pie to follow later in the week!