The Evolution Of The Granite City . . .

Aberdeen, also know as the Grey City, or the Silver City with the Golden Sands.

Amongst the masses of notes and newspaper clippings will sometimes come a little gem like this.

This particular pamphlet is dated 1910 and attributed to Jessie M.King. It is a series of pen-and-ink illustrations of the old city.

Aberdeen is Scotland’s third, and the United Kingdom’s 29th most populous city, with an official population estimate of 217,100.

Aberdeen first received Royal Burgh status from King David I (1124–53). Then, in 1319, the Great Charter of Robert the Bruce transformed Aberdeen into a property-owning and financially independent borough.

Its nicknames include the Granite City, the Grey City and the Silver City with the Golden Sands. 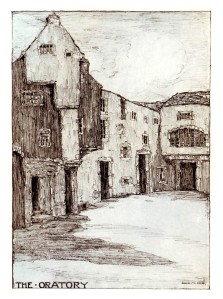 It has also been named the Oil Capital of Europe, but black does not feature on any official documentation!

It also has been dubbed Britain’s “Flower Capital “ because it has won the Beautiful Britain in Bloom title no less than 10 times. There are fabulous floral displays throughout the city – arising from a base of 2.5 million roses, 11 million daffodils and 3 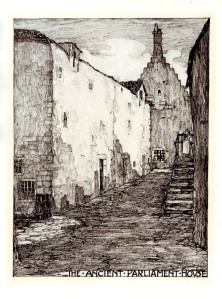 During the 18th to 20th centuries, Aberdeen’s buildings incorporated locally quarried grey granite, whose mica deposits sparkle like silver in the sun and give an impression of wealth and stability. Not a bad impression to give!

I shall include further drawings from this delightful little book very soon!

This entry was posted in Scotland, The Evolution Of . . . and tagged Aberdeen, Granite City, Scottish. Bookmark the permalink.

1 Response to The Evolution Of The Granite City . . .