Elizabeth David, (born Elizabeth Gwynne; 26 December 1913 – 22 May 1992) was a British cookery writer of the mid-20th century who strongly influenced the art of home cookery and traditional British fare.

Born to an upper-class family, Elizabeth Gwynne was the second of four children, all daughters, of Rupert Sackville Gwynne and the Hon. Stella Ridley, daughter of the 1st Viscount Ridley. Both parents’ families had considerable fortunes, the Gwynne’s from engineering and land speculation, and the Ridley’s from coal mining. 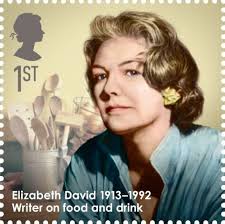 She and her sisters grew up in Wootton Manor, a Jacobean manor house in Sussex. Her father became the Conservative MP for Eastbourne, and a junior minister in Andrew Bonar Law’s government. Overwork and vigorous recreational pastimes, (racing, riding and adultery) brought about his untimely death in 1924 at the age of only 51.

In the thirties sShe studied art in Paris, became an actress, and ran off with a married man with whom she sailed in a small boat to Italy. She then worked for the British government, running a library in Cairo. While there she married, but the marriage was not long lived and after the war she returned to England, where, dismayed by the gloom and bad food, she wrote a series of articles about Mediterranean food that caught the public imagination.

Books on French and Italian cuisine followed, and within ten years David was a major influence on British cooking. She introduced a generation of British cooks to Mediterranean food hitherto barely known in Britain, such as pasta, Parmesan cheese, olive oil, salami, aubergines, red and green peppers, and courgettes. In the sixties she opened a shop selling kitchen equipment which continued to trade under her name after she left it in 1973.

When she eventually returned to England, David unenthusiastically went through the social rituals for upper-class young women of presentation at court as a débutante and the associated dances. The respectable young Englishmen she met at the latter did not appeal to her and to her mother’s displeasure she chose instead to become an actress. She joined the Oxford Repertory Company in 1933, and moved to London the following year. 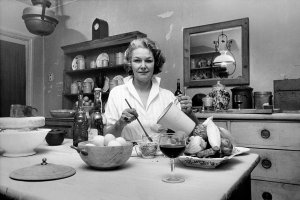 A gift from her mother of The Gentle Art of Cookery by Hilda Leyel was her first cookery book. She later wrote, “I wonder if I would have ever learned to cook at all if I had been given a routine Mrs Beeton to learn from, instead of the romantic Mrs Leyel with her rather wild, imagination-catching recipes.”

Returning after six years of Mediterranean warmth and access to a profusion of fresh ingredients, David found her native country in the post-war period grey and daunting. She encountered terrible food: “There was flour and water soup seasoned solely with pepper; bread and gristle rissoles; dehydrated onions and carrots; corned beef toad in the hole. I need not go on.”

Partly to earn some money, and partly from an “agonized craving for the sun”, David began writing articles on Mediterranean cookery. Her first efforts were published in 1949 in the British magazine Harper’s Bazaar. From the outset, David refused to sell the copyright of her articles, and so she was able to collect and edit them for publication in book form.

In the sixties David stopped writing for The Sunday Times, unhappy about editorial interference with her copy, and joined the weekly publication The Spectator. Her books were now reaching a wide public, having been reprinted in paperback by the mass-market Penguin Books.

“Her professional career was at its height. She was hailed not only as Britain’s foremost writer on food and cookery, but as the woman who had transformed the eating habits of middle-class England”

In 1963, when she was 49, David suffered a cerebral haemorrhage.She recovered, but her sense of taste was temporarily affected, and her confidence was badly shaken. Together with four business partners, David opened a shop selling kitchen equipment. The partners were spurred on by the recent success of Terence Conran’s Habitat shops, which sold among much else imported kitchen equipment for which there was evidently a market. Elizabeth David Ltd opened at 46 Bourne Street, Pimlico, in November 1965.

While running the shop, David wrote another full-length book, Spices, Salt and Aromatics in the English Kitchen (1970), the first of a projected series on English cookery. The shop was never profitable, but David would not lower her standards in search of a commercial return. Gradually her partners found her approach unsustainable, and in 1973 she left the business. To her annoyance, the shop continued to trade under her name, as it was legally entitled to do.

In 1977 David was badly injured in a car accident, from which she took a long time to recover. While she was in hospital, the last book that she completed unaided, English Bread and Yeast Cookery (1977), was published. Its scholarship won high praise, and The Times Literary Supplement suggested that a copy of the book should be given to every marrying couple.

The death in 1986 of her younger sister Felicité, who had lived in the top floor of her house for thirty years, was a severe blow to David. In May 1992 she suffered a stroke, followed two days later by another, which was fatal. She died at her Chelsea home on 22 May 1992, aged 78, and was buried on 28 May at the family church of St Peter’s, Folkington.

Elizabeth David won the Glenfiddich Writer of the Year award for English Bread and Yeast Cookery, she was awarded honorary doctorates by the Universities of Essex and Bristol, and the award of a Chevalier de l’Ordre du Mérite Agricole. However, the honour that most pleased her was being made a Fellow of the Royal Society of Literature in 1982 in recognition of her skills as a writer. In 1986 she was awarded a CBE.

In 2012, to mark the Diamond Jubilee of Elizabeth II, David was chosen by BBC Radio 4 as one of the 60 Britons who have been most influential during the 60 years of the Queen’s reign. In 2013 her portrait was one of a series of first-class stamps issued to celebrate the centenary of ten “Great Britons”

“David was the best writer on food and drink this country has ever produced. When she began writing in the 1950s, the British scarcely noticed what was on their plates at all, which was perhaps just as well. Her books and articles persuaded her readers that food was one of life’s great pleasures, and that cooking should not be a drudgery but an exciting and creative act. In doing so she inspired a whole generation not only to cook, but to think about food in an entirely different way”

“Basil was no more than the name of bachelor uncles, courgette was printed in italics as an alien word, and few of us knew how to eat spaghetti or pick a globe artichoke to pieces… Then came Elizabeth David like sunshine, writing with brief elegance about good food, that is, about food well contrived, well cooked. She made us understand that we could do better with what we had.”