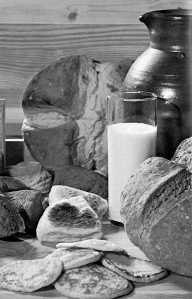 The original scone was round and flat, usually the size of a medium size plate. It was made with unleavened oats and baked on a griddle (or girdle), then cut into triangle-like quadrants.

When, during the first half of the twentieth century, baking powder became more widely available, scones became the well-leavened, sweetened product we know today.

Scones sold commercially are usually round in shape though they can also be triangles or squares. 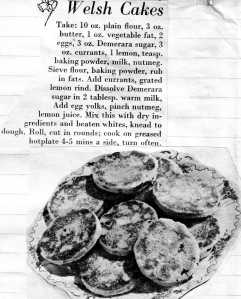 At home, British scones are generally of the lightly sweetened variety and are often made to a treasured hand-me-down family recipe rather than a cook-book. The better the scone, the better the cook

They can be plain, spiced, honeyed or fruited.

The griddle, or girdle, scone is a variety of scone which is fried rather than baked, similar to drop scones.

Soda scones, like soda bread, tend to be made in the traditional round shape and served, cut into half and served whipped cream and strawberry jam.

Drop scones tend to be made, like pancakes, by dropping the batter onto a griddle plate or frying pan to cook it.

Cheese scones are a plain, unsweetened mix with grated cheese and a little paprika added.

The above recipes can also be made using wholemeal flour for those who prefer it.

Any of them would be acceptable on the British tea-table or in a lunch-box.

But what could be more British than a freshly baked scone, with whipped cream and strawberries, and a cup of tea in the garden on a warm summers day?