Something Fishy for Friday

Between the wars, as more fish were being gathered into the food chain through advances in large-scale trawling, more varied and cheaper fish began to appear in the fishmongers.

Despite this, it was still seen as a lesser food than meat. But the realities of the war more or less forced fish onto the household menu through the shortage of meat.

This is the final part of the mid-fifties fish book which adds a few variations on a theme though still far short of that which is currently available. 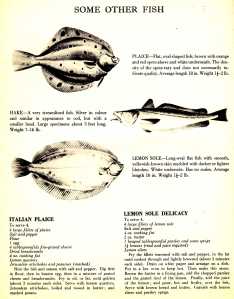 With the beginnings of the supermarket take-over of the high street and more consistent and reliable methods of freezing the buying of fish became easier than ever.

Also around this time the pleasures of eating out were returning and the hotels and restaurants, freed from the final constraints of rationing, made the most of it.

The public were no longer prepared to accept the ‘old school’ food of earlier decades. Again, a lot of ideas and recipes not seen since the previous century, resurfaced.

Continental ideas too began to creep in on a much larger scale. Many more people had been exposed to the delights to be had from France and Spain and the improvement in lines of supply via air-freight and better developed rail links was beginning to open up the culinary world.

The humble pub also jumped on the bandwagon.

In order to attract the newly confident and self-assured women, who had survived the Blitz and the drudgery of factory work, they began to offer simple, home-made food.

Volume and value were the key. Wine, that did not have the same ‘boozer cachet’ as beer and spirits, was also becoming more acceptable and wide-spread. The traditional pub began its long evolution into the ‘family friendly’ destination it has become. And fish followed in its wake. 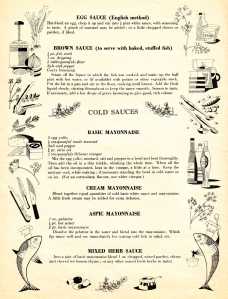