The Religion of Bread

The ability to sow and reap cereals is one of the chief abilities that allowed man to dwell in communities. The discovery of wheat as a self-replicating crop that could be harvested on a regular basis changed mankind forever. The nomadic life of the hunter-gatherer devolved to the point where cattle were herded, rather than hunted, and crops tended.

Wheat has been found in pits where human settlements flourished 8,000 years ago.

A settled population also led to ideal conditions for the establishment of fundamental religion.

An agent, natural yeast or beer ‘must’ was added to the dough that caused the mixture to rise into a dough that could be formed into many and varied shapes that better satisfied the eye and the palate.

Bread, both leavened and unleavened, is mentioned in the Bible many times.

Bless the bread, bless the people : San Antonio Abate is said to be the patron saint of bread bakers.

Bread has become the symbol of the supreme gift from God to humankind : eternal life, the body of Christ in the Eucharist: “Take this and eat, for this is my body.”

One of the most powerful Biblical metaphors is in the Lord’s Prayer. In it, people pray to God not for just a slice of hot buttered toast, but for those elements that encompass the basic requirements for daily living. 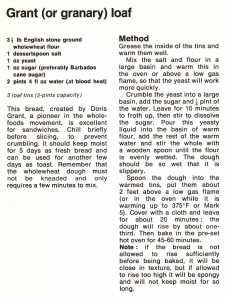 Bethlehem, located some five miles south of Jerusalem, means ‘house of bread’ in Hebrew. It is considered the place of origin of the house of David and therefore the birthplace of Jesus.

In the Old Testament wheat and bread are symbols of the fecundity of the earth and have made their way into common parlance with such phrases as ‘a bun in the oven’ for a pregnant woman.

Evidence of the time also suggests that bread-making, preparing the grain, making the bread and baking it, was work of women.

For the majority of religions bread was un-leavened until the intervention of the Gods. In royal palaces, and the more opulent households, far more would have been expected from the baker. He would be a far more specialized animal, with a greater access to the exotic ingredients that would allow for the structured development of bread as a foodstuff.

The book of Exodus tells us that the Jews, when lost, bereft and starving in the desert, were fed with manna, or bread from heaven. In the book of Ezekiel, the prophet is instructed to take wheat, barley, beans, lentils, and millet and make a bread out of them for nourishment while he too was in the desert. There is no record of the taste or texture of such a loaf it could be worth a try!

The hurried departure of the Israelites from Egypt, also described in Exodus, prevented their bread being leavened as usual. Jewish people eat matzo, a flat bread, made without yeast, during the festival of Passover to recall that their ancestors did not have time to wait for the dough to rise when they fled from pharaoh’s army.

In the New Testament, Jesus uses bread as the ultimate metaphor when he refers to it as His body: blessed, broken, and shared.

After more than two millennia this is still practiced in the form of Holy Communion each Sunday in Christian churches around the globe.

One of the most powerful Biblical metaphors remains today in the form of the Lord’s Prayer, where people pray to God for life’s necessities : our Daily Bread.

This entry was posted in Breads, The Evolution Of . . . and tagged Bible, bread, leavened, oven, religion. Bookmark the permalink.