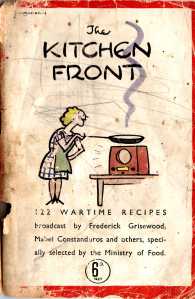 The Ministry of Food

Unlike World War I, within days of the Second World War being declared the Ministry of Food was dusted off and let loose once more. Many unobtainable or limited ingredients simply went by the board.

Government bodies were set up to advise on the best ways to produce if not exciting then at least palatable dishes for the table.

Any house with a garden could receive information on what could best be produced from the available space.

The Women’s Institute and country parish groups were urged to scour woodland and scrub to collect berries, fruits and roots for the making of jams and preserves.

Dried milk powder and dried egg began to appear in the shops, though still technically part of the ration, that could be used in the baking of cakes and puddings. But the results could be very hit and miss if proper care were not taken when rehydrating.

Hard Time Cookery, a volume of recipes published in 1940 by the Association of Teachers of Domestic Subjects aimed at the basic principles of diet and the inclusion of vitamins, minerals, proteins and fats vital to health.

It extolled the virtues of tripe, breadcrumb stuffing, rice, beans, lentils, oatmeal, and macaroni. If it happened to taste good too, that was a bonus.

As all these bland, pulses and grains became more common, new ways were devised, or old recipes desperately revived, in an attempt to coax the maximum taste from everything.

In 1942 a National Loaf was launched. Neither brown nor white, it was quite legally adulterated with chalk to bolster calcium intake throughout the population. It was not very long before it became universally hated. It was so horrendous, and with little margerine, butter, preserves or even sugar to make it more palatable, it soon became known as ‘Hitlers Secret Weapon’

In addition to the adult rations babies and younger children could get concentrated orange juice, milk and cod liver oil from Welfare Clinics.

Pregnant women, new mothers and invalids could also benefit from extra milk. Another benefit that arose from the rationing years was the introduction of school meals.

With many women working long hours in the factories and on the land, this measure was to ensure that school children could benefit from a good and nutritious meal at least once a day. A lot of the recipes I use here apply the majority of the advice handed out nowadays by modern nutritionists.Plenty of fresh fruit and vegetables, little fat, sugar or red meat and more importantly, not too much!

While there were many down-sides to having such a limited and monotonous diet, one of the major up-sides was that by the time rationing was finally phased out in the mid fifties, the general health of the population had increased immeasurably. A rather extreme but effective, way of improving the nation’s health.

And what of the government, war or no war, who had to impose such conditions in modern times? Would the stoic British housewife don her faithful ‘pinny and return to the fray?

I shudder to think!

This entry was posted in Wartime and tagged baking, bread, butter, onions, vegetables. Bookmark the permalink.